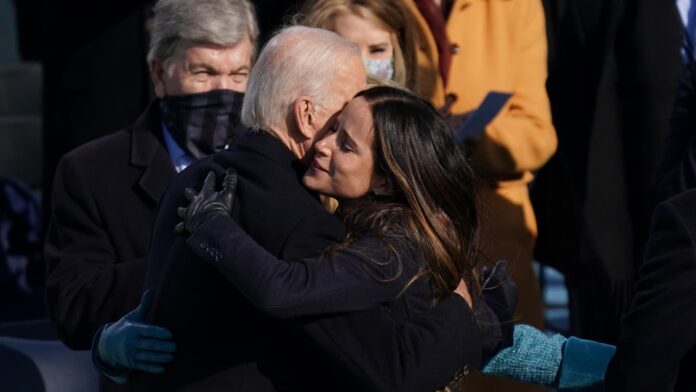 U.S. President Joe Biden hugs his daughter Ashley after being sworn in on the West Front of the U.S. Capitol on January 20, 2021 in Washington, DC. During today’s inauguration ceremony Joe Biden becomes the 46th president of the United States.

Two Florida residents pleaded guilty Thursday in federal court in New York in connection with the theft and sale of the diary and other items belonging to Ashley Biden, the daughter of President Joe Biden, court records show.

The defendants, Aimee Harris, 40, and Robert Kurlander, 58, conspired to steal items from Florida and transport them over state lines in September 2020, when Ashley’s father was the Democratic nominee for the White House, according to a charging document.

Kurlander as part of his plea in U.S. District Court in Manhattan agreed to cooperate with federal prosecutors, who are continuing to investigate how the diary was obtained by Project Veritas, the right-wing group that specializes in provocative videos and investigations designed to embarrass media outlets and other targets.

Neither Biden was not identified by name in the charging document released Thursday.

But the details of the case match with what has been previously reported about an investigation by federal prosecutors in New York into the theft of Ashley’s diary, which occurred weeks before the 2020 presidential election.

The charging document says the father of the theft’s victim was a “then-former government official who was a candidate for national office.” President Biden is a former U.S. senator and vice president.

Ashley’s diary, which she had left in a Delray Beach, Florida, home she was renting, and other items were ultimately sold for $40,000 to Project Veritas, which has offices in Mamaroneck, New York.

Harris, who is a resident of Palm Beach, later temporarily stayed at the same residence where Ashley had lived, and discovered items that included a journal with “highly personal entries” and a digital storage card that the victim left behind, according to the charging document.

The charging document says Project Veritas purchased the stolen property from Harris and the Jupiter resident Kurlander paid each of them $20,000.

The charging document says that Harris asked Kurlander for his assistance in selling certain items of the victim’s property.

The document said that Harris and Kurlander in September 2020 attended a campaign fundraiser in Florida for a person, identified as Candidate-2, who was running against the victim’s father. That fundraiser is understood to be one held for then-President Donald Trump.

Four days later, a representative from Trump’s campaign told Harris and Kurlander that the campaign was not interested in buying the stolen property, the charging document says.

Kurlander then texted Harris, saying, “[Candidate-2] campaign can’t use it. They want it to go to the FBI. There is NO WAY [Candidate-2] can use this. It has to be done a different way.”

“They sold the property to an organization in New York for $40,000 and even returned to take more of the victim’s property when asked to do so,” Williams said.

“Harris and Kurlander sought to profit from their theft of another person’s personal property, and they now stand convicted of a federal felony as a result,” he said.

Both defendants face a possible maximum sentence of five years in prison on the charge of conspiracy to commit interstate transportation of stolen property.

They each agreed to forfeit $20,000 as part of their guilty pleas.

FBI agents last November searched several locations that belonged to current and former members of Project Veritas as part of the probe of the Biden diary theft.

Project Veritas CEO James O’Keefe, in a statement issued at that time, said that the organization had been approached by people offering it the Biden diary. But O’Keefe said the group decided not to publish the contents of the diary, and later turned it over to law enforcement when Ashley’s lawyer refused to accept it.

“At the end of the day, we made the ethical decision that because, in part, we could not determine if the diary was real, if the diary in fact belonged to Ashley Biden, or if the contents of the diary occurred, we could not publish the diary and any part thereof,” O’Keefe said at the time.