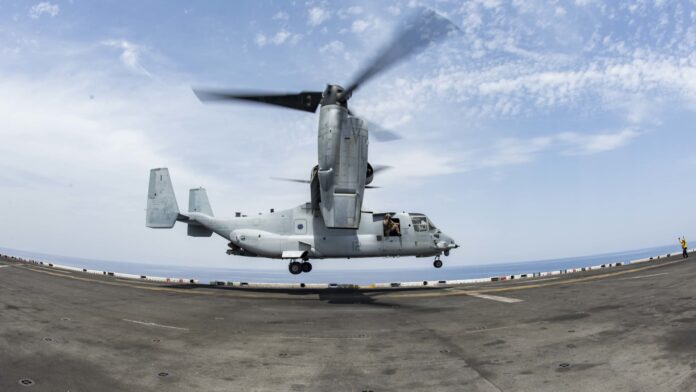 All five Marines on board an Osprey aircraft that crashed during a training mission in the Southern California desert Wednesday were killed, officials said Thursday.

The five died “following an aviation mishap” involving the MV-22B Osprey near Glamis, the United States Marine Corps said in a statement.

“We mourn the loss of our Marines in this tragic mishap. Our hearts go out to their families and friends as they cope with this tragedy,” Maj. Gen. Bradford J. Gering, commanding general of 3rd MAW said in the statement.

The victims were part of Marine Aircraft Group 39, 3rd Marine Aircraft Wing, an aviation squadron based in San Diego, according to the statement. Their names were not released.

“As a matter of policy, identities of deceased service members are not released until 24-hours after all next-of-kin notifications have been completed,” the statement said.

The aircraft was based at Camp Pendleton in San Diego, according to officials.

Equipment recovery efforts have begun at the crash site and the investigation is ongoing.

The Osprey — which can take off and land like a helicopter, but fly like an airplane thanks to its “tiltrotor” engines — has had a troubled history over the two decades it has been flying in U.S. military training exercises and missions.

Even though the Osprey was involved in crashes that killed more than 30 people before it went into service in 2007, the Marine Corps has stood behind the vehicle as relatively safe and effective.