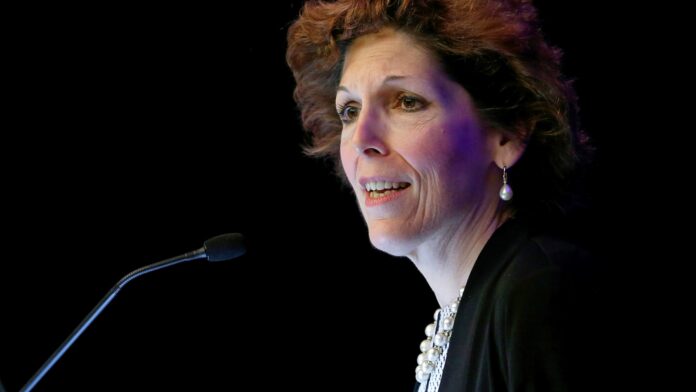 1. Stocks can’t shake it off

So much for a fresh start in September. U.S. equities markets were primed for another selloff Thursday morning after closing out August on a losing streak. Things had looked promising for stocks this summer after a terrible first half of the year. Inflation eased, but only a bit – and that has the Federal Reserve ready to hike rates even more. Right now the Fed’s benchmark rate is in the 2.25% to 2.5% range, but Cleveland Fed President Loretta Mester said Wednesday she sees rates rising significantly higher to over 4%. Nor does she expect the central bank to cut rates next year. The Fed is expected to hike rates by another three quarters of a point later this month.

A sign is posted in front of the Nvidia headquarters on May 10, 2018 in Santa Clara, California.

Shares of Nvidia fell in off-hours trading after the chip maker said the U.S. government is restricting sales to China out of concerns the Chinese military would use the company’s products. Nvidia said it expects to lose about $400 million in revenue from China during the current quarter. The United States has in recent years sought to crack down on China from exploiting U.S.-made technology. Last month, President Joe Biden signed a bipartisan bill that was intended to boost America’s chip-making sector in a bid to strengthen the country’s competitive power in its economic struggle with China.

A customer stocks up on bottled water in a Sam’s Club during a heatwave on July 21, 2022 in Houston, Texas.

Even Sam’s Club, Walmart‘s warehouse chain, isn’t immune to inflation. The company said Wednesday that it was raising its entry-level membership fee for Sam’s Club for the first time in nine years. Starting Oct. 17, members will pay $50 a year, up from $45. Warehouse stores have done well of late, as inflation-weary shoppers buy in bulk to save on essential items. Walmart’s decision could put pressure on Sam’s Club rival Costco, which charges $60 a year for its basic membership. In July, Costco’s CEO, Craig Jelinek, told CNBC that he didn’t think it was the “right time” to hike the club fee — or the price it charges for its famously inexpensive hot dogs.

Britain has become the first country in the world to approve Moderna’s bivalent Covid-19 vaccine, which targets both the original strain of the virus and the newer Omicron variant.

The FDA has approved a new round of Covid booster shots that target the highly contagious omicron BA.5 subvariant. The decision came as kids head back to school and many companies push their employees to return to the office in earnest. Experts expect Covid cases to rise this fall and winter, although with reduced death rates. Officials also have said that the new boosters – Pfizer‘s are authorized for people 12 and older; Moderna‘s for those 18 and up – should provide more lasting protection while keeping hospitalization rates down.

UN inspectors delayed their inspection of Ukraine’s Zaporizhzhia nuclear power plant amid nearby fighting between Russian and Ukrainian forces. Ukraine’s state nuclear power company said the plant’s fifth reactor was also shut down due to the nearby shelling. The facility is occupied by the Russians, and Ukrainian officials have accused them of attempting to spoil the inspectors’ visit. Ukraine President Volodomyr Zelenskyy, who welcomed the UN team Wednesday, has warned that the plant is vulnerable to a nuclear catastrophe as his forces seek to beat back Russian President Vladimir Putin’s invading forces. (Update: The inspectors have arrived at the plant.)

‘More restrictive’ policy likely if inflation fails to come down