5 things to know before the stock market opens Thursday, September 8 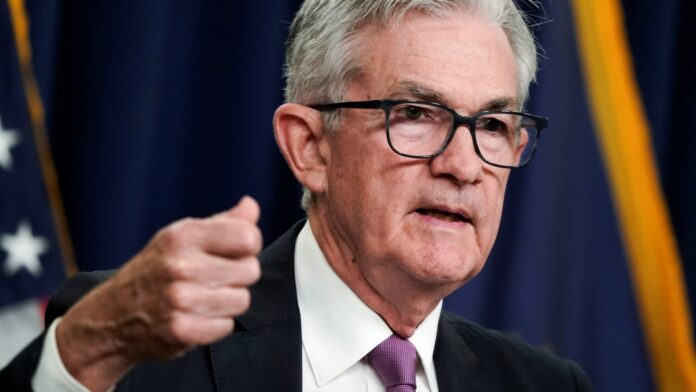 U.S. stock futures showed little movement in either direction Thursday morning, ahead of remarks from Federal Reserve Chairman Jerome Powell and jobless claims data. Investors are looking for momentum after Wednesday’s rally, when all the three major U.S. averages posted their best day in nearly a month. The Fed is primed to raise rates again this month, as it continues its battle against inflation, so market watchers are trying to get a grip on what the central bank will do next. Goldman Sachs analysts raised their rate hike outlook, saying they expect another three-quarter-point increase this month, a half-point increase in November and a quarter-point increase in December.

Apple CEO Tim Cook holds the new iPhone 14 at an Apple event at their headquarters in Cupertino, California, September 7, 2022.

Tim Cook doesn’t think it’s all that important for Apple to improve the texting experience between iPhones and smartphones using Google‘s Android system. He told the Code Conference on Wednesday that he isn’t hearing many complaints about it from Apple customers, and that his priority is to get people to buy iPhones. When a questioner griped to Cook that he can’t send videos to his mother due to the disconnect, the Apple CEO responded: “Buy your mom an iPhone.” Fittingly, the exchange came on the same day that Apple unveiled its latest iPhone lineup.

Video game retailer GameStop is pushing further into the virtual world – while throwing some more red meat to the online meme stock crowd. The company’s earnings report Wednesday wasn’t pretty. It posted a wider quarterly loss on a decline in sales, while its cash pile fell to about half of what it was a year earlier. But the stock rallied after hours, regardless, as GameStop announced a partnership with 30-year-old billionaire Sam Bankman-Fried’s FTX crypto exchange. There weren’t many details in the announcement, other than some vague points about e-commerce and online marketing. GameStop will also sell FTX gift cards. The partnership comes a couple months after the retailer started a marketplace for virtual collectibles known as NFTs – which are also traded on FTX.

Russian President Vladimir Putin, his forces bogged down in Ukraine, lashed out at Europe. The region is already contending with an energy crunch thanks to Russia’s decision to halt gas supplies in the Nord Stream 1 pipeline. That move is putting pressure on European governments preparing for the cold months ahead. At an economic forum, Putin said Russia could sever energy contracts in response to political moves, such as price caps on energy imports from his country. “We will not supply gas, oil, coal, heating oil — we will not supply anything,” Putin said. “We would only have one thing left to do: as in the famous Russian fairy tale, we would let the wolf’s tail freeze.”

Movies are still big. It’s the screens that got small. Former Disney CEO Bob Iger on Wednesday described what many industry analysts have been talking about these past couple years: The demand needed to fill up cinemas just isn’t there anymore, even as blockbusters return to theaters after Covid disrupted Hollywood. “I don’t think movies ever return, in terms of moviegoing, to the level that they were at pre-pandemic,” Iger said at the Code Conference. And even though huge movies like “Spider-Man: No Way Home” and “Top Gun: Maverick” still pack ’em in, franchises don’t need to appear at the multiplex to make a cultural impact. Iger cited HBO’s “Game of Thrones” series and Disney’s own success with “Star Wars” programs as evidence of this. “I’m a big believer in movies. I love big movies,” Iger said, “but it doesn’t come back to where it was.”

Bed Bath & Beyond closing 150 stores. Map of ones on the list so far