5 things to know before the stock market opens Wednesday, August 24 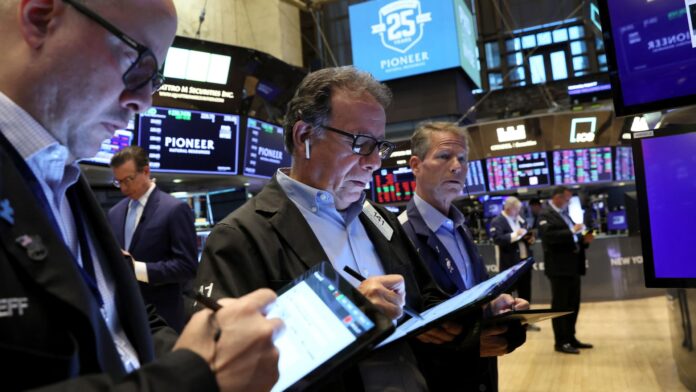 U.S. equities markets were set to open effectively flat Wednesday morning, following a mixed session Tuesday. Stocks had some momentum heading into August after a strong July, but things died down considerably as the summer rolled along. So far this month, the S&P 500 is about flat after jumping 9% in July. One strategist said markets are in a “tug of war” over what the economy is doing and what the Fed might do next. The central bank is expected to boost rates again in September as inflation remains high. Markets are through the thick of earnings season, too. Tech plays Salesforce and Nvidia are set to report after the bell Wednesday, while Peloton, Gap, Dollar General and Dollar Tree are on tap Thursday.

2. What Nordstrom and Macy’s are telling us

Shoppers leave a Nordstrom store on May 26, 2021 in Chicago, Illinois.

While Walmart and Target stick with their forecasts, even as they aggressively mark down piles of unwanted goods, higher-end retailers Nordstrom and Macy’s are scaling back their outlooks as they confront softer demand and their own inventory issues. The revisions fuel the notion that customers are spending more on essentials like groceries, which benefits Walmart, the largest grocer in the nation as well as the biggest retailer. Both Nordstrom and Macy’s reported strong quarterly results Wednesday but warned that their shoppers have pulled back on buying discretionary merchandise, particularly apparel. “We are adjusting our plans and taking action to navigate this dynamic in the short term, including aligning inventory and expenses to recent trends,” Nordstrom’s CEO said Tuesday.

U.S. President Joe Biden speaks during a bill signing ceremony where the president is signing “The Inflation Reduction Act of 2022” into law in the State Dining Room of the White House in Washington, U.S. August 16, 2022.

President Joe Biden is expected to announce his decision on student loan forgiveness soon, potentially as early as Wednesday. NBC News, citing multiple sources, reported that Biden is expected to extend the pause on student loan debt payments while forgiving loans up to $10,000 for borrowers with yearly incomes of less than $125,000. That likely won’t be enough to satisfy advocates for slashing student debt, which totals more than $1.7 trillion in the United States. It will also tick off Republicans and some people who don’t have any outstanding student debt. Polls routinely show support for student debt forgiveness, although a recent CNBC survey found that nearly 60% of respondents think student debt forgiveness would fuel already-high inflation.

4. Silver lining in the mortgage market

Contractors work on concrete slabs in the Cielo at Sand Creek by Century Communities housing development in Antioch, California, U.S., on Thursday, March 31, 2022.

Overall, mortgage demand is still weak, but a surprising sector of the market showed signs of a comeback. Applications for government-backed loans with lower down payments rose 4% last week. That is “potentially a sign of more first-time homebuyer activity,” according to Joel Kan, an economist for the Mortgage Bankers Association. Housing inventory has long been tight, particularly at the lower end of the market. But demand among higher-income homebuyers has softened a bit, and the average size of home loans has declined.

An Amazon Prime truck pulls away after a delivery in Washington, DC, on February 17, 2022.

One of the biggest sellers on Amazon is preparing to liquidate, CNBC’s Annie Palmer reports. Almost a year ago, Pharmapacks, a seller of health and personal care products, was the top U.S. seller on Amazon. Its parent company, Packable, was also getting ready to go public via a SPAC. Now Packable is laying off employees after it failed to find a lifeline from lenders. The company benefited in the early days of the pandemic, but revenue growth slowed in recent months as broader supply chain issues left it with several items out of stock.