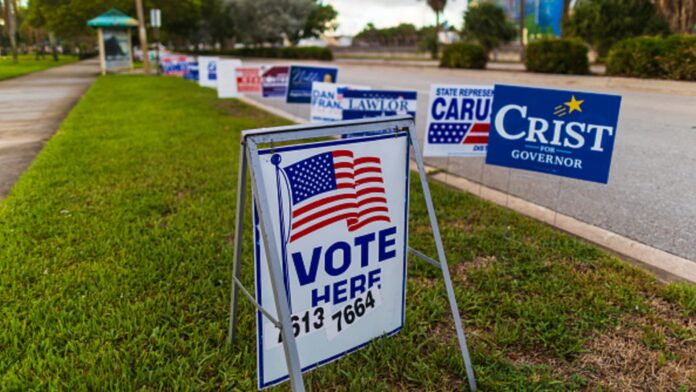 Florida Gov. Ron DeSantis learned who his Democratic challenger will be this fall. The impact of redistricting was on full display. Democrats sorted through rivalries amongst themselves. And abortion may give Democrats a lifeline in an otherwise rough November.

The most intense stretch of the midterm primary season ended Tuesday with results that will set up fierce general election contests across the United States.

Takeaways from Tuesday’s contests in Florida and New York:

Midterm elections are usually miserable for the party in power. But Democrats hope one of their biggest losses in memory may ultimately salvage 2022 for them.

Ever since the conservative majority on the U.S. Supreme Court revoked the constitutional right for a woman to obtain an abortion, Democrats have seen a boost in donations, polling and performance in special elections for open congressional seats. The latest came Tuesday in a Hudson Valley swing district that, in a Republican wave year, should have been an easy GOP win. Instead, Democratic Ulster County executive Pat Ryan defeated his Republican counterpart from Duchess County, Marc Molinaro.

The stakes, governing-wise, were small — the seat will disappear in the fall as a new congressional map goes into effect. But because the race became a referendum on abortion after the high court’s ruling, the political implications are huge. It comes after a ballot measure to ban the procedure was crushed in solidly conservative Kansas.

Republicans were anticipating a typical midterm landslide, with inflation high and President Joe Biden’s approval rating low. It may still end up a solid GOP year, but Ryan’s win is the latest indication that Democrats don’t have to abandon hope.

One Florida politician wasn’t facing a primary challenge on Tuesday but made sure to dominate the news anyway — DeSantis.

DeSantis is considered former President Donald Trump’s top rival for the 2024 Republican presidential nomination, partly due to the way he’s leaned into political and cultural divides in the Sunshine State. On Tuesday he demonstrated why.

The governor began the day with a Cabinet meeting, which included the only Democrat elected statewide in Florida, Agriculture Commissioner Nikki Fried. She was competing for her party’s nomination to face DeSantis that evening.

DeSantis shook Fried’s hand as the meeting concluded and told her “good luck” before criticizing her campaign and predicting — accurately, it turned out — her loss in brief remarks to reporters.

“I think that you know she had an opportunity as being the only Democrat elected statewide to exercise some leadership and maybe get some things done and instead she’s used her time to try and smear me on a daily basis, that’s all she does,” DeSantis said of Fried.

Expect to hear a lot more like that from DeSantis in the months — and possibly years — ahead.

Florida and New York, which held primary elections Tuesday, were two of the states whose legislative maps were most radically redrawn this year to favor one political party. It was part of a centuries-old political gambit known as gerrymandering.

But Tuesday night showed two different sides of gerrymandering. The New York map that Democrats redrew to ruthlessly target vulnerable Republicans got tossed out by the state’s highest court as an illegal partisan act.

The map was redrawn to be more balanced, disregarding the political fortunes of some of New York’s most prominent members of Congress and lumping several high-profile lawmakers in the same district in a push for equity. Ignoring scattered protests that its April ruling came too late in the process to change the map, the high court moved the state’s congressional primary to Tuesday, two months after its June primary for state offices.

That’s why New York’s Democratic primaries Tuesday were so fractious and chaotic.

In contrast, Florida’s Republican-appointed State Supreme Court declined to change the partisan map that DeSantis pushed the Republican-controlled Florida legislature to approve. Unlike the New York court, the Florida court declined to mess with the map close to the election.

As a result, Florida’s incumbent House members generally stayed put Tuesday night, not forced into any career-ending primary battles because of districts being moved. The great exception was Rep. Charlie Crist, who ran for — and won — the Democratic nomination for governor partly because DeSantis’ map transformed his district into a solidly Republican one. The new map also effectively eliminated two seats, currently represented in Washington by Black Democrats, where African Americans comprise the largest share of voters.

Nationally, both parties tried to gerrymander during the past redistricting cycle, but Democrats were reined in slightly more than Republicans — largely due to Florida and New York. Florida’s top court may change that in the coming years when it rules on challenges to DeSantis’ maps.

Meanwhile, the U.S. Supreme Court is considering multiple cases that could change the ability of courts to redistrict gerrymanders. That may help determine whether we see more congressional primaries like New York’s, or more like Florida’s.

It’s been muted by the spectacle of Trump’s makeover of the GOP, but Democrats also spent the primary season torn over the direction of their party.

Two new losses came Tuesday, when a liberal state senator was crushed by Rep. Sean Patrick Maloney in a congressional primary north of New York City. And attorney Dan Goldman, who worked on Trump’s first impeachment, narrowly beat a bevy of more progressive rivals in a primary for a congressional seat centered in Brooklyn.

But the left has won some victories this primary season, nabbing a nomination for a House seat in Pennsylvania and seeing one of its favorite politicians, that state’s Lieutenant Governor John Fetterman, win the party’s nomination for Senate.

Neither side has been crushed, so expect more left-on-center primaries next election cycle.

TRUMP’S PARTY, WITH AN ASTERISK

Trump set out to demonstrate his dominance of the GOP this primary season, and he succeeded — to a point.

But Trump had some huge humiliations — especially when he tried to intervene in governor’s races in Idaho, Nebraska and especially Georgia, where Trump failed to oust Gov. Brian Kemp for refusing to overturn the 2020 election in his state and award it to Trump.

Even more significantly, Trump elevated candidates who may not be able to win competitive races — or may even pose a threat to democracy itself. Last week, the GOP’s Senate leader, Mitch McConnell, warned that his party may not win a Senate majority due to “candidate quality” among its nominees. They include Trump-backed candidates struggling in swing states, like Herschel Walker in Georgia, JD Vance in Ohio and Mehmet Oz in Pennsylvania.

Others, like the GOP’s nominees for Pennsylvania governor, Doug Mastriano, and Arizona governor, Kari Lake, have denied that Trump lost the 2020 election, raising questions about whether they’d certify the actual winners of future elections if they take over their statehouses.

Trump does not always have to intercede for extreme candidates who have mimicked his style to rise in Republican primaries. On Tuesday, Laura Loomer, a conservative provocateur who’s been banned from several social media websites for posting anti-Muslim remarks, surprised many with a strong — albeit unsuccessful — showing in a primary challenge to 73-year-old Florida Rep. Daniel Webster.

This story has been corrected to show Rep. Sean Patrick Maloney defeated a liberal state senator, not an assemblywoman; and deletes reference to a Democratic-appointed court as having redrawn the map; others were involved as well.