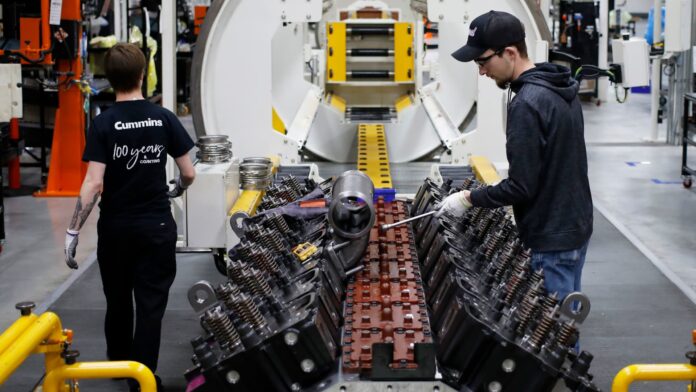 Dismal regional manufacturing readings are sounding alarm bells that business activity is slowing down heading into the summer. The latest bad news came Monday out of Texas, where the Dallas Federal Reserve’s outlook survey for the sector in June pointed to a substantial level of contraction, fueled by a plunge in the growth rate of orders that could be harbinger of bad things to come. “Orders are trending down, and with the Federal Reserve continuing to tighten, we think the six-month outlook for a recession is strong,” a paper manufacturing executive said in a survey response. “Current orders and projections back this up.” Similar sentiments came elsewhere. “Orders have slowed slightly. Inflation fears are worse than the inflation,” said a printing and related product manufacturing respondent. A computer and electronic product manufacturing official noted “clear signs of early cooling beginning” as “in-quarter orders have slowed to a trickle.” It was all part of an ugly report that saw the general business activity index plunge to -17.7, which represents the percent difference between companies seeing expansion vs. contraction. That was a 10.4 percentage point drop from the May reading and the worst reading since May 2020, or the early days of the pandemic crisis. Worse, the company outlook gauge slid to -20.2 from -10, indicating that executives don’t see brighter days ahead. Growth rate of orders fell 10.9 points to -16.2, new orders tumbled 10.5 points to -7.3, and unfilled orders slumped 12.9 points to -8.8. There were only three indexes that saw positive month-over-month changes, with delivery time jumping to 19.9, an improvement of 15.6 percentage points since May. However, the employment index fell 5.7 percentage points to 15.2 — still indicating expansion, but at a slowing rate. Bleak results are emerging The Texas reading is part of a trend of weak regional Fed manufacturing indexes. Philadelphia’s index for June tumbled 6 percentage points to -3.3, also the worst level since May 2020. The latest reading from the Richmond district, in May, collapsed to -9 during that month from 14 in April. New York’s Empire Manufacturing Surve y actually showed improvement in June, rising 10 points, but was still in negative territory at -1.2. The weakness comes with concerns growing over whether the U.S. is headed into a recession just a year after posting its fastest growth since 1984. GDP fell at a 1.5% annualized pace in the first quarter, and the Atlanta Fed’s GDPNow tracker is indicating growth of just 0.3% in the second quarter, revised up slightly Monday from a previous reading of zero. On a national scale, the latest ISM Manufacturing Survey showed expansion in May, with a reading of 56.1 that was nonetheless the second-lowest level since September 2020. Deutsche Bank, which was the first Wall Street forecaster to say it sees a recession ahead , said recently that while the current state of the U.S. economy likely does not meet that definition, it’s getting closer. “In sum, the set of macro indicators is consistent with a descent into recession but are not signaling we are already there,” Deutsche chief strategist Binky Chadha and others said in a note last week. There was yet another bad omen for the economy Monday — a survey from JPMorgan Chase that showed just 19% of business leaders at mid-market companies are optimistic about the national economy. That’s a historic low in a survey that goes back 12 years.

GameStop’s future, from one of the last analysts covering the chain