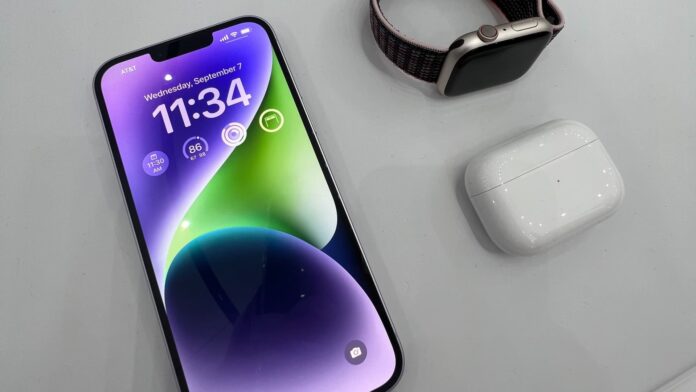 Apple introduced the iPhone 14 lineup, Apple Watch 8 products, and new AirPods Pro at an event in Cupertino, California, on Sept. 7, 2022.

During Apple’s annual iPhone launch event on Wednesday, the company revealed devices with better displays, cameras, a satellite messaging feature, and a slightly new design on the Pro models, replacing the notch with a smaller, more integrated cutout.

But the biggest surprise from Apple is something that didn’t happen: a price increase.

Despite surging inflation around the world and supply chain challenges that have made it more challenging to procure parts, Apple said the entry-level iPhone 14 will start at $799, the same amount that it initially charged for last year’s iPhone 13. The successor to the iPhone 13 Pro, the iPhone 14 Pro, remains at $999. Apple’s highest-end iPhone, the Pro Max, still starts at $1099 for the new version.

Analysts had been expecting some price hikes in Apple’s lineup. In holding steady, Apple didn’t want to further dent demand with the risks of a deteriorating economy already threatening to crimp consumer spending. IDC expects global smartphone shipments to decline over 6% this year, although mostly in the lower-end categories where Apple doesn’t compete.

Apple did make one tweak to the lineup that could increase the average selling price of an iPhone. The company eliminated the iPhone 13 Mini, which was the least-expensive model, at $699. It’s been replaced by the iPhone 13 Plus, a bigger model with a 6.7-inch screen and an $899 price tag.

Apple also introduced a pricey new Apple Watch, the Ultra, with a bigger screen and more rugged titanium case, which starts at $799.

But even that device is less expensive than Apple’s Edition models, which cost as much as $10,000 when introduced in 2014, and is in line with more recent editions with titanium cases that started at $799. The other new Apple Watch models, the Series 8, are consistent with previous prices.

Apple raised the entry-level price for a new Apple Watch by eliminating the Series 3, an older model that was retailing for $199. The least-expensive new Apple Watch is now the SE, which starts at $249, or $30 less than the older SE version.

Apple also introduced a new version of its AirPods Pro wireless earbuds at $249, which is unchanged from the previous model.

While U.S. prices were largely flat, Apple sets prices in each country and they can sometimes differ from the American price converted into a foreign currency. The U.S. dollar is strong right now, and some devices are more expensive overseas. For example, Apple’s new Ultra watch starts at $1,099 in Canada.

WATCH: Apple’s product cycle is not a surprise anymore