HomeInvestingAssessing where the S&P 500 will bottom this time as it heads...
Investing 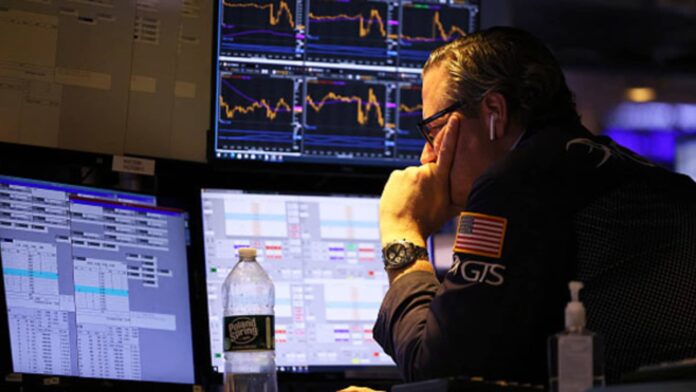 This is the daily notebook of Mike Santoli, CNBC’s senior markets commentator, with ideas about trends, stocks and market statistics. -Macro stress running through currency and bond markets and “Don’t fight the Fed” attitudes continue to weigh on stocks, though oversold conditions continue to build above the YTD lows as investor sentiment again turns toward pessimistic extremes. -The post-Fed-decision slide took the S & P 500 below yet another would-be support zone around 3800, spilling lower in the morning but so far not in a disorderly way (for better or worse). -This puts the index below the “range within a range” where it’s spent most of the past 4-5 months and down into the overshoot zone that culminated in the mid-June low of 3636 (intraday). Given how the oversold indicators are piling up, a test or near-test of buyer’s appetites is underway or should be soon. -Still plausible as a sloppy, unnerving bottoming process leading into the final weeks of the tough seasonal period before the typically strong post-midterm-election-year tailwinds are due. But the market action itself isn’t doing much to underwrite this scenario yet. -The Fed was a half-turn more hawkish than expected, implicitly forecasting recession-like conditions and a slightly higher plateau for rates – but one that should still be reached fairly soon, by early 2023. Having 2022 act as the year when all the tough medicine was administered has some appeal both for policy makers and investors. And then it will be about monitoring the degree of slowdown or contraction, quantify likely earnings erosion and sort out how much has been priced in. -Ramping U.S. rates and surging dollar causing stress globally, with the Bank of Japan intervening to support the yen in a bid to rescue its own bond-yield cap. Volatility across assets is high enough to keep disciplined institutional money in a defensive posture until it abates or prices reset much lower in more of a washout. -Much talk of the appeal of bonds as the yield cushion builds up. Makes sense, though it’s tough to see a scenario where bonds have a smooth profitable ride from here that doesn’t also take the pressure off equities. Both assets have been dropping in tandem all year, and if the Fed nearing its destination and inflation cooling are needed for bonds to do better those are also ingredients for stocks to stabilize/recover. -Bigger picture: With a tough more downside the S & P will be at a level first reached two years earlier (from the post-election rally in 2020). For what it’s worth, prior cyclical bear scares have bottomed around when the market had gone nowhere for two years (2018, 2016, 2011, 1998), but not with the protracted downturns of 2000-2002 and 2007-2009. -AAII retail-investor sentiment in despondent mode, bearish respondents surpassing 60% for the fifth time in history (back to 1987 when the survey began). It’s a small sample size and an unscientific poll, but the prior four instances all were followed by good one-year stock returns, with the 2008 episode first leading to a nasty further leg lower before the bottom was hit in early 2009. Info here from Ryan Detrick at Carson Investment Research. -Seeing some migration toward lower-volatility stocks, pharma, staples, some energy and Microsoft bouncing small after a recent breakdown. -Market breadth today is weak, but no washout, 75% downside volume. VIX flattish, higher end of the range. Need new lows or a capital-markets accident to jerk it much higher. The locus of the agitation is in bonds.

5 things to know before the stock market opens Friday, August 19