HomeInvestingAugust jobs report shows a 'soft landing' by the Fed is still...
Investing 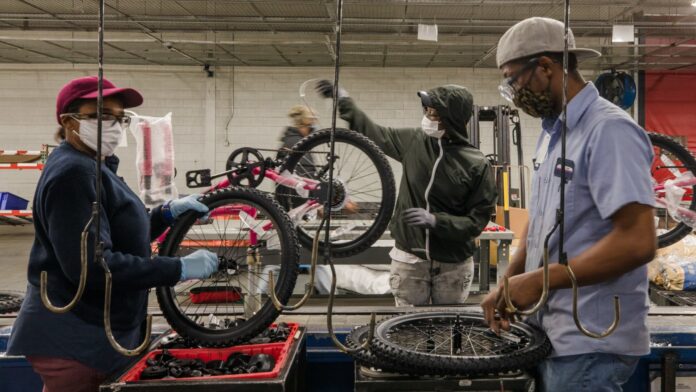 August’s employment report showed the economy is still moving forward , but it was not so strong as to convince markets the Federal Reserve will raise interest rates by another three-quarters of a point in September. The report, released ahead of the market open, showed the economy added 315,000 jobs, very near the 318,000 expected by economists surveyed by Dow Jones. Average hourly wages increased by 0.3%, less than expected. The unemployment rate rose unexpectedly, to 3.7% from 3.5%. But that was because there were more workers joining the labor force. The closely watched participation rate moved up a solid 0.3 to 62.4%. There were 786,000 workers who joined the labor force, and the total civilian workforce swelled to a record 164.7 million in August. “In my view, the main message in this is an increase in labor supply opens the door to a slower pace of rate hikes beginning in September. The surest path to a soft landing is for supply constraints to alleviate,” said Michael Gapen, chief economist at Bank of America. “So that means improvement in global supply chains and a rebound in the U.S. labor supply. The key stat here is the labor force for the first time has now exceeded its pre-pandemic level.” Gapen said that increase in the labor force, combined with a slower pace of wage increases and a downtick in hours worked shows that some of the labor shortage issues could be resolving. “This suggests some of the imbalances in the labor market may be reversing,” he said. He added that his expectation for Fed rate hikes in September is unchanged. “We were going into this report expecting 50 [basis points] and we come out of it expecting 50 [basis points].” A basis point equals 0.01 of a percentage point. The Fed has raised its fed funds futures rate to 2.25% to 2.50% since March, and the last two rate moves were large three-quarter point hikes. Stocks rose and bond yields slipped, particularly at the shorter end of the yield curve. The 2-year yield, which most reflects Fed policy, was at 3.41% in morning trading, well off a high above 3.50%. In the fed funds futures market, the odds of a third 75 basis point rate hike was close to 65%, off from near 80% ahead of the report, according to Greg Faranello of AmeriVet Securities. “I am favoring 50 for this month but respect the idea of another 75,” he noted. Faranello said the market’s focus now shifts to the Sept. 13 release of the August consumer price index. He said Fed Chairman Jerome Powell said the totality of data is important for the Fed’s decision making, so the CPI will matter a great deal ahead of the Fed’s Sept. 20 and 21 meeting. “There are those who are leaning toward 50 anyway. This will give them more ammunition,” said Diane Swonk, chief economist at KPMG. “I think the debate will be driven a bit by the fact we’re going to have another downgrade in energy prices for the August CPI number.” She said the CPI should show the rate of inflation slowed from July’s 8.5%, but that will not stop the Fed from raising its fed funds rate to 4% by year end. She said Fed officials are making it clear they will not relent in their fight with inflation. and it will take more than just a few reports to convince them they are making traction against rising prices. “They’ve been fooled before,” she said.

Buy the dip in oil stocks, stay away from everything else