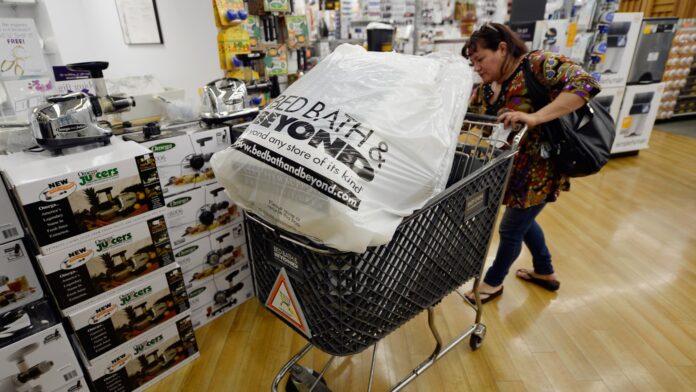 Even though shares of Bed Bath & Beyond have surged more than 70% this week, Loop Capital isn’t upgrading its view on the stock. That’s because the jump in share price is likely due to a meme-stock short squeeze and isn’t tied to any fundamental improvements, according to the firm, which reiterated its sell rating and $1 price target. The stock closed Thursday’s trading session at $10.63 per share. Recent news concerning the company has been more negative than positive, according to analyst Anthony Chukumba. There was a dip in existing home sales in June, the fifth month-over-month decline, which doesn’t bode well for the retailer. Amazon also recently agreed to buy Roomba maker iRobot, which could result in less favorable product allocations and support for the company. In addition, recent channel checks by Loop Capital didn’t go well, according to the note. “We saw widespread out-of-stocks, heavily discounted private label merchandise, dirty stores, and disengaged employees,” Chukumba wrote. Though the retailer is potentially seeking an asset-based credit line, new financing would be expensive and might not change much for the company, according to Loop. “We also doubt a new ABL would make BBBY’s vendors— who we continue to worry could place the company in a “death spiral” by demanding more onerous payment terms—any more comfortable about BBBY’s near- and long-term prospects,” said Chukumba. The only “Hail Mary pass” that could potentially change Loop’s outlook on the retailer is a sizeable equity offering, according to the note. But even that would come with issues. Loop estimates that the company would have to raise at least $500 million to settle its current debts and significantly boost its liquidity. “At BBBY’s current price this would result in the company issuing 47M new common shares—which would dilute its existing shareholders by a whopping 37%,” Chukumba wrote.

Nvidia is a buy even with weaker guidance from China lockdowns, Wall Street says

This earnings season will be tough as inflation erodes margins, Barclays says

Software company acquisitions are a bullish sign for the sector’s stocks, Cramer says