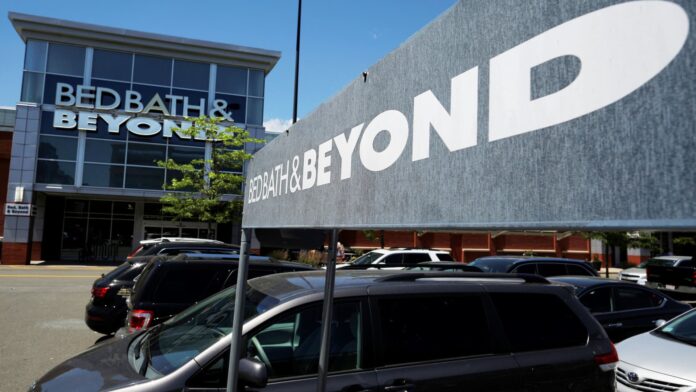 Bed Bath & Beyond is unwinding its recent meme-fueled rally but is still overvalued and facing multiple upcoming challenges, according to Wedbush. The firm has an underperform rating and a $5 price target on the retailer, suggesting about 50% downside from where shares currently trade. Last week, Bed Bath & Beyond started working with bankruptcy law firm Kirkland & Ellis , and some vendors have stopped shipments due to lack of payments, according to Bloomberg. “If the company does not secure adequate financing to appease its vendor base, it might have not appropriate inventory for the key holiday period, leading to a fast downward spiral and creating bankruptcy risk,” Seth Basham wrote in the Monday note. Still, Basham expects that cash burn will remain high over the next two quarters until inventory becomes a source of cash. The company is currently running an aggressive sale campaign on mostly brand-owned products. “Such a large-scale promotion might mean another inventory reserve markdown is in the works, and with suppliers hesitant to refill BBBY’s warehouses, this could limit the company’s capacity to fully tap the $800m remaining on its ABL that is partly predicated on the market value of BBBY’s inventory balance,” Basham wrote. Other possible financing options for the company could include using its Buybuy Baby brand as collateral by turning it into an unrestricted subsidiary or taking a “first in, last out” loan, according to Wedbush’s note. The firm also noted that pressure could mount on Bed Bath & Beyond to sell Buybuy Baby. “Selling BABY might buy the company enough time to right its ship and ease vendor concerns, but it does not fundamentally change the negative outlook for the core business, which is burning cash and losing resonance with customers,” Basham said. “Pressure is mounting for BBBY to appease vendors, improve cash flow, increase liquidity, and reduce sales declines — room for any mistakes is shrinking.” —CNBC’s Michael Bloom contributed to this story.

The easing of inflation pressures is giving the economy some breathing room, for now