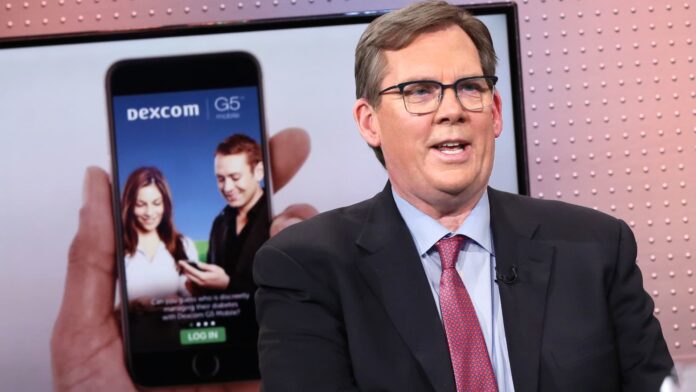 Medical tech company Dexcom is primed for big gains ahead, Bernstein said Friday. The firm initiated Dexcom with an outperform rating and a price target of $105 per share. That target represents a roughly 37% upside from where shares of the company closed at $76.50 on Thursday. “DXCM is a clear buy over a 1-/2-year horizon,” wrote Bernstein analyst Lee Hambright in a Friday note. “Even with conservative growth and margin estimates, we’re 3% ahead of consensus on the top line.” Dexcom is a leader in making continuous glucose monitoring devices, which are used by diabetes patients. Diabetes is one of the fastest-growing chronic illnesses in the world – it currently affects 537 million adults globally and is responsible for nearly $1 trillion in global health care spending, according to Bernstein. The company has seen solid growth in the last five years and still has a long runway ahead in both the U.S. and other developed countries, as the core market is only 30% penetrated globally, according to Bernstein. “Numbers will go up over next 12-24 months, driven by G7 FDA approval and Medicare reimbursement for basal-only insulin users, both of which are likely to come in 2H22,” wrote Hambright. Still, the firm remains cautious on the dream case, noting that some of the upside potential growth for Dexcom is already priced into the stock. In addition, the company faces potential roadblocks such as low awareness and approval of constant glucose monitoring devices from patients and physicians, as well as lack of insurance coverage for some potential users. The higher price of such therapy is also a barrier, according to the note – currently, people with type-2 diabetes that don’t need intensive insulin treatment spend about 60 cents a day on glucose monitoring, while constant glucose monitoring devices cost more than $3 per day currently.