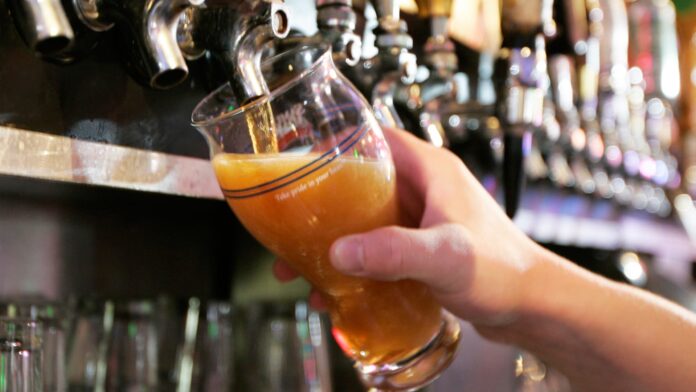 A rough year for investors in Boston Beer could soon get worse, according to investment firm Bernstein. Analyst Nadine Sarwat downgraded Boston Beer to market perform from outperform, saying in a note to clients that the beverage company’s forecast appears too optimistic. “We still think SAM is a rare gem, with a unique ability to focus on long-term brand building and a track record of four successful waves of innovation. … But Truly just hasn’t performed as we anticipated, and we think a cut to F22 guidance is highly likely,” Sarwat wrote. Third-party data shows that demand for Boston Beer’s seltzer may be drying up, Bernstein said. Boston Beer’s current fiscal year 2022 volume growth forecast is for a gain of 4% to 10%. Sarwat expects about a 9 percentage point cut from the middle of that range is needed. “Truly’s volumes have declined -17% YTD YoY and -20% in the last 12 [weeks] in Nielsen,” she said. “If Truly continued declining at -20% in H2, we estimate that F22 group shipments would decline -4.3%,” Sarwat wrote. Truly helped create the hard seltzer category, but its early success encouraged rivals to introduce their own brands. As competition heated up, Truly’s share eroded. Now, the entire hard seltzer category appears under pressure as a wave of canned cocktails has drawn consumer attention. Bernstein also said the flood of hard seltzer flavors may be confusing consumers and could be weakening loyalty to the products. Bernstein did point to Boston’s Twisted Tea brand as a source of strength for the company. Boston Beer’s stock has already been under pressure, falling 40% year to date. Bernstein cut its price target for Boston Beer to $390 per share from $565 per share. The new target is about 29% above where the stock closed Tuesday. — CNBC’s Michael Bloom contributed to this report.