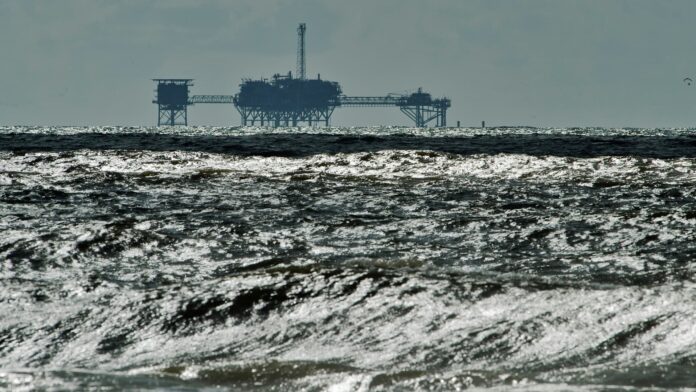 The Biden administration released a five-year offshore oil and gas drilling development plan on Friday that would block all new drilling in the Atlantic and Pacific Oceans within U.S. waters, but would allow some lease sales in the Gulf of Mexico and the south coast of Alaska.

The proposed plan, which has not been finalized, could allow up to 11 lease sales over the next five years. It also includes an option for the administration to conduct no sales. The Department of the Interior is inviting the public to comment on the program.

The president had vowed to suspend all new federal drilling on public lands and waters, but was ultimately thwarted after legal challenges from several GOP-led states and the oil sector.

As U.S. energy prices rise, the fossil fuel sector has urged the administration to increase offshore drilling to lower gas prices at the pump. However, climate groups have argued that new lease sales would exacerbate climate change and do nothing to help high gas prices.

A recent report published by Apogee Economics and Policy said that temporary suspension in new offshore oil and gas sales would have minimal impact on gas prices for consumers — just less than a cent-per-gallon rise in prices over the next nearly two decades.

“From Day One, President Biden and I have made clear our commitment to transition to a clean energy economy,” Interior Secretary Deb Haaland said in a statement on Friday. “Today, we put forward an opportunity for the American people to consider and provide input on the future of offshore oil and gas leasing.”

The Interior’s most recent offshore oil and gas auction was in November in the Gulf of Mexico. A court order later vacated the sale, arguing that administration didn’t adequality account for the harm to the environment and impact on climate change.

Nearly 95% of U.S. offshore oil production and 71% of offshore natural gas production occurs in the Gulf of Mexico, according to the Natural Resources Defense Council. Roughly 15% of oil production in the U.S. comes from offshore drilling.

Environmental groups on Friday condemned the administration for proposing limited new lease sales instead of announcing a ban on all new drilling.

“The Biden administration hade an opportunity to meet the moment on climate and end new offshore oil leasing in Interior’s five-year program,” said Drew Caputo, vice president of litigation at Earthjustice. “Instead, its proposal to serve up a bunch of new offshore oil lease sales is a failure of climate leadership and a breach of their climate promises.”

Environmental groups have also argued that new leasing would impede the Biden administration’s goal to slash carbon emissions by at least 50% by 2030 and keep global warming under 1.5 degrees Celsius.

“This draft plan falls short of what we desperately need: An end to new oil and gas drilling in federal waters,” Food & Water Watch Executive Director Wenonah Hauter said in a statement. “President Biden has called the climate crisis the existential threat of our time, but the administration continues to pursue policies that will only make it worse.”

The next Silicon Valley? Tech Nation to close after UK pulls funding

Snowflake can jump 33% as it gains more share in the cloud market, Raymond James say