HomeUSABiden, Obama to campaign together during midterm election push
USA 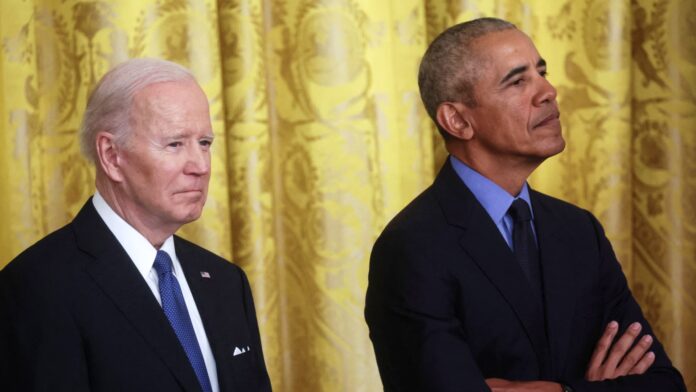 U.S. President Joe Biden stands with former President Barack Obama during an event on the Affordable Care Act, the former president’s top legislative accomplishment, in the East Room at the White House in Washington, U.S., April 5, 2022.

President Joe Biden and former President Barack Obama will appear on the campaign trail together Saturday for the first time since Biden took office.

The former president and vice president pair will reunite in Philadelphia in a last-minute attempt to energize voters in the swing state ahead of the midterm elections on Tuesday. Democratic Senate hopeful John Fetterman and gubernatorial candidate Josh Shapiro will join the presidents at the event.

Former President Donald Trump is also campaigning in Pennsylvania on Saturday in Latrobe, outside of Pittsburgh. Trump has endorsed the celebrity doctor and Republican Senate candidate Mehmet Oz as well as Republican candidate Doug Mastriano for governor.

One of Pennsylvania’s incumbent senators, GOP Sen. Pat Toomey, is retiring, which means the state could determine which party controls the currently 50-50 Senate. Whether Democrats or Republicans control the Senate will likely define Biden’s ability execute his agenda over the next two years.

In their only debate in Harrisburg, Pennsylvania, the Senate candidates fielded questions on abortion rights, raising the minimum wage, gun reform and fracking. Each candidate accused the other of lying and did not shy away from attacking their opponent’s personal lives.

Oz gained on Fetterman in the polls as Fetterman recovered from a debilitating stroke in May that took him off the campaign trail for three months. Oz’s campaign launched attacks on Fetterman’s health and questioned whether he is physically fit to take office. Fetterman’s primary care physician wrote that the candidate “has no work restrictions and can work full duty in public office,” while noting he is experiencing lingering auditory processing issues.

In turn, Fetterman’s campaign has blasted Oz, a wealthy TV star, as an out-of-touch carpetbagger from New Jersey who got rich by promoting sometimes-dubious health information to his audiences.