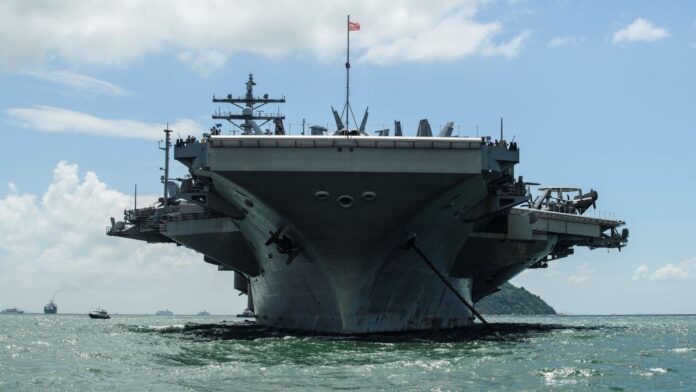 The USS Ronald Reagan (CVN-76) aircraft carrier is seen during a port visit in Hong Kong on October 2, 2017.

The twin announcements signal an approach that seeks to raise American military vigilance in the region while simultaneously limiting opportunities for Beijing to point to any U.S. action as a provocation for increased aggression toward Taiwan and neighboring countries.

The aircraft carrier USS Ronald Reagan and her escort ships will remain in the South China Sea “for a little bit longer than they were originally planned to be there,” National Security Council spokesman John Kirby said at the White House on Thursday.

The goal of the strike group’s prolonged stay in the region will be “to monitor the situation,” he said. He added that “the president believed that it was the prudent thing to do, to leave her and her escort ships there for just a little bit longer.”

The Ronald Reagan carrier strike group has been operating in the South China Sea since the middle of July, according to the U.S. military.

Kirby said the postponement of the Minuteman 3 ballistic missile test aims to demonstrate “the behavior of a responsible nuclear power by reducing the risks of miscalculation” while China “engages in destabilizing military exercises around Taiwan.”

Still, the United States does not expect China to scale back its aggressive actions any time soon.

Tensions between Washington and Beijing have increased significantly in the past week, driven in part by House Speaker Nancy Pelosi’s decision to visit Taiwan with a delegation of congressional Democrats.

The White House and Pentagon reportedly cautioned the powerful California lawmaker not to make the trip when she did, due to the potential for increased bilateral tensions.

Pelosi wrote in an op-ed that she believes China poses a grave threat to the independence of Taiwan, which Beijing considers a Chinese province. She said her trip was necessary to show American support for democracy in Taiwan and around the world.

But as Biden tries to balance a desire to flex American muscle in the South China Sea and not provoke further actions from Beijing, experts say the distinction could be lost on the Chinese government.

“China doesn’t want or need to convince itself that we’re serious. And parsing between ‘serious’ and ‘provocative’ is like angels dancing on a pin,” said Andrew Mertha, director of the China Global Research Center at Johns Hopkins School of Advanced International Studies.

“This ‘splitting the difference’ exhibits precisely the confusion and incoherence that Beijing likely sees as some sort of deliberate, aggressively opaque strategy,” he said in an interview with CNBC.

“If cooler heads are prevailing behind the scenes — in both Beijing and Washington — this will be a prelude to a shift to a more sustained, substantive diplomatic engagement,” said Mertha.

Kirby emphasized Thursday that key lines of communication between the U.S. and China are open, despite the heightened tensions.

“We’re using those lines of communication, and I think you’ll see that in days to come as well,” he said, somewhat cryptically.

The White House did not immediately respond to an email asking for further details on what Kirby meant.

GOP megadonor Mercers distance themselves from Trump for 2024 campaign