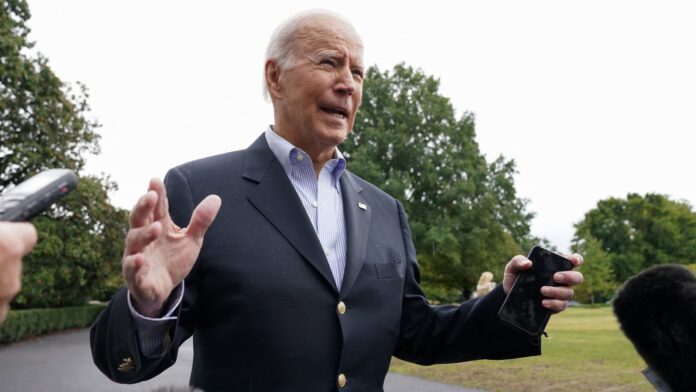 U.S. President Joe Biden speaks to reporters as he departs for Puerto Rico from the White House in Washington, U.S., October 3, 2022.

President Joe Biden told Rev. Al Sharpton that he will seek a second term in a private conversation at the White House last month, the civil rights leader informed his National Action Network staff in Washington later that day.

“I’m going to do it again,” Biden said as he posed for a photograph with Sharpton, who is also an MSNBC host, in the Roosevelt Room, according to a NAN official who recounted Sharpton’s description. “I’m going.”

While Biden allies have said he will seek re-election, he has shied away from declaring that unequivocally, at least in part to avoid triggering campaign-finance reporting laws. His remarks to Sharpton at the tail end of a meeting with the leaders of several of the nation’s most prominent civil rights organizations represent a stronger assertion that he will be on the ballot again.

NBC News has reached out to the White House for comment on Biden’s intentions.

In 2020, Black voters were the key to Biden’s comeback in the Democratic primary, helping him win the pivotal South Carolina contest after he failed to take first place in the first three races in Iowa, New Hampshire and Nevada. Three days later, Biden’s overwhelming support among Black voters propelled him to an insurmountable delegate lead on Super Tuesday.

It was in the context of his 2020 race that Biden confided in Sharpton at the Sept. 2 White House meeting. During a group conversation, Sharpton reminded Biden that the two had sat down in January 2019 on the sidelines of an event commemorating Martin Luther King Jr.’s birthday. At that time, Biden had not yet declared his candidacy and was seeking Sharpton’s endorsement — or at least a pledge of neutrality — in a field that would include now-Vice President Kamala Harris and Sen. Cory Booker, D-N.J., both of whom are Black.

Then, Biden solicited Sharpton’s advice on running in 2020, avoiding a definitive declaration that he would contend. But, as Sharpton recounted for the group at the White House, that conversation nearly four years ago convinced him he was among the first to know that Biden would ultimately run.

When the civil rights meeting wrapped up, Sharpton made his way over to Biden for a one-on-one photo.

As Biden’s approval numbers have ticked upward in the last couple of months — from a low of 36.8 percent in the Real Clear Politics average of polls in late July to 42.1 percent now — talk of an alternative Democratic nominee has died down. The last sitting president to forgo a re-election campaign was Lyndon Johnson in 1968.

In public comments, Biden has been circumspect, even as his allies quietly prepare for a re-election campaign.

“Look, my intention as I said to begin with is that I would run again,” Biden said on CBS’s 60 Minutes Sept. 18 — more than two weeks after his meeting with civil rights leaders. “But it’s just an intention. But is it a firm decision that I run again? That remains to be seen.”

Nike has a ‘much better risk-reward’ than the market believes