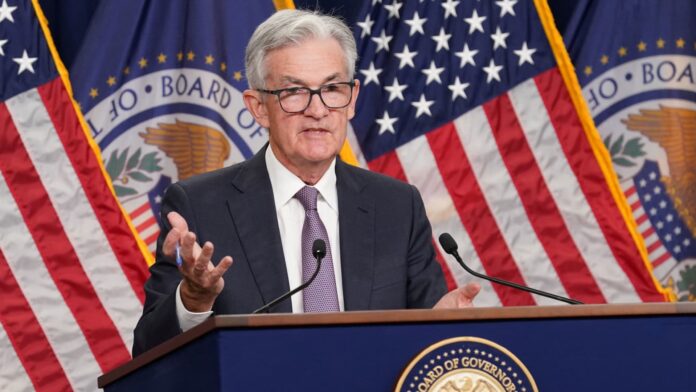 The Fed spoke and Wall Street listened. A Wednesday interest rate hike of 0.75 percentage point , or 75 basis points, came with a dose of hawkish central bank rhetoric that caused economists to ramp up their views on where rates are headed, and what the cost of that policy might be to the bigger picture. “We think this really underscores the likelihood of a recession over the next 12 months,” Rob Dent, senior U.S. economist in the Americas for Nomura, said in the aftermath of a meeting that saw the Federal Reserve considerably raise its informal forecast for the trajectory of rates ahead. Fed Chair Jerome Powell ‘s “comments yesterday just support that view. Growth is going to slow down and the Fed is going to stand there and say inflation is pretty high, so we’re going to keep on tightening policy,” he said. Dent said the meeting’s outcome was largely in line with his firm’s expectations, or that the central bank will likely raise its benchmark rate to a terminal range of 4.5%-4.75% by 2023. However, other firms were caught somewhat off guard. Markets recoiled sharply Wednesday and continued to drift lower Thursday . “There’s going to be a point we think over the next couple of months when growth really starts to weaken,” Dent said. “The market is looking for the Fed to back off. The risk is they won’t, and then that’s when you’ll see more abrupt tightening in financial conditions.” Here’s a look at views elsewhere on the Street: JPMorgan Chase The call : The firm still expects the Fed to hike 50 basis points in November, but has raised its December view to another 50 basis points, pushing its terminal forecast up 25 basis points to 4.5%. The comment : In a note titled “Bring the pain,” JPM chief U.S. economist Michael Feroli cited these impacts: “The new forecasts are not only more hawkish but somewhat more realistic, as they now recognize at least some labor market weakness will be needed to get inflation down. Even so, it’s still close to an immaculate disinflation, as only a whiff of labor market weakness generates a very sizable decline in inflation,” he wrote. Goldman Sachs The call : A 75 basis point move in November, 50 basis points in December and 25 basis points in February, for a peak of 4.5%-4.75%, up half a percentage point from the previous expectation. The comment : “The path of the funds rate in 2023 will depend mainly on two issues. The first is how quickly growth, hiring and inflation slow … . The second is whether FOMC participants will really be satisfied with a sufficiently high level of the funds rate and willing to slow or stop tightening while inflation is still uncomfortably high,” economists Jan Hatzius and David Mericle wrote. Bank of America The call : 75 basis points in November, 50 in December, 25 each in February and March of 2023. Terminal rate of 4.75%-5%, or 75 basis points higher than the previous forecast. The comment : “Our baseline outlook for the U.S. economy continues to call for a downturn in the economy beginning in 1H 2023, including an increase in the unemployment rate to 5.0%,” BofA economist Michael Gapen wrote. “The Fed thinks the true policy mistake is not restoring price stability and is willing to risk a recession in order to bring inflation back down to 2.0%.” Citigroup The call : November to see 75 basis points, followed by 50 in December and 25 in February, adding a cumulative 25 basis points for a terminal rate of 4.5%-4.75%. The comment : “We expected the Fed to deliver a hawkish message through higher ‘dots’ and have been emphasizing upside risk to Fed policy rates,” Citi economist Andrew Hollenhorst wrote. “Still, the Fed managed to exceed even our hawkish expectations.” Morgan Stanley The call : A 75 basis point move in November, up 25 points from the previous forecast, and a general call that the central bank will stay higher for longer than the market expects. The comment : “Though a fourth hike in November is not guaranteed, Chair Powell’s tone today and our data forecasts make that our base case,” chief U.S. economist Ellen Zentner wrote. “The response of the real economy to higher rates has been muted thus far, leading the Fed to pencil in a higher peak rate and longer hiking cycle. We think inflation persistence will keep the Fed at peak for most of next year, challenging the market’s assumption of an earlier start to cuts.” Deutsche Bank The call : A 75-point move in November, followed by 50 more in December. Recession to follow. The comment : “This near-term signal was reinforced by indications from Chair Powell’s press conference and is in line with our existing view,” wrote chief U.S. economist Matthew Luzzetti. “More broadly, the Committee’s hawkish signals were consistent with our expectation of a near-5% terminal rate by early 2023 that induces a recession by midyear.” Barclays The call : 75 in November, followed by 25 in December, bringing the year-end funds rate to 4.25%-4.5%. Both calls were 25 basis points higher than previous. One more 25 basis point hike in February, followed by a 50 basis point cut “in the latter portion of the year.” The comment : “The picture that emerged from the meeting is that of a committee committed to hiking aggressively amid sustained inflationary pressures from an economy that is being propelled by a very resilient and robust labor market,” economist Jonathan Millar wrote. UBS The call : 75 basis points in November, another 50 in December, with three 25 basis point cuts later in 2023. The comment : “We expect the risks of a hard landing are rising,” economist Jonathan Pingle wrote. “We view this as quite restrictive policy. Next year, we expect inflation to make more progress toward 2.0% than the FOMC appears to, and we expect the labor market to slow considerably.” — CNBC’s Michael Bloom contributed to this report .