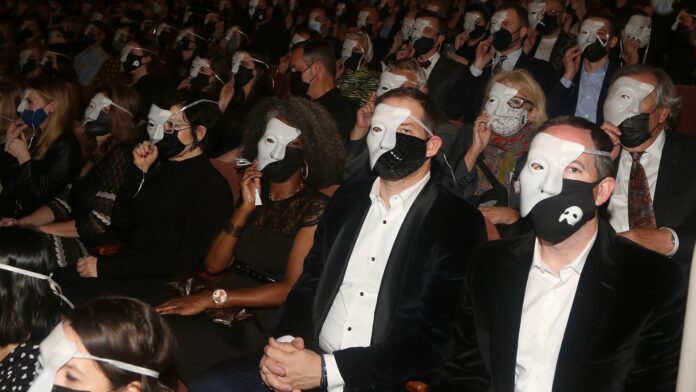 The audience is given phantom masks to wear during the re-opening night performance of”Phantom Of The Opera” on Broadway at The Majestic Theatre on October 22, 2021 in New York City.

While all 41 Broadway theaters in New York City will adopt the “mask optional” policy, audience members are still encouraged to wear face coverings in theaters.

The organization said the policy will be reevaluated monthly and a protocol for August will be announced in mid-July.

“Millions of people enjoyed the unique magic of Broadway by watching the 75th Tony Award Ceremony recently. Millions more have experienced Broadway LIVE in theatres in New York City and throughout the U.S., since we reopened last fall,” Charlotte St. Martin, president of the Broadway League, said in a press release. “We’re thrilled to welcome even more of our passionate fans back to Broadway in the exciting ’22-’23 season that has just begun.”

The heavily trafficked Manhattan district went dark in March 2020 as part of public venue restrictions related to Covid-19. The first shows to return took the stage roughly 18 months later, with vaccine and mask mandates in place for most audience members.

These are JPMorgan’s favorite stocks heading into November

Trump’s picks in Tuesday’s GOP primaries spent over $400,000 at Mar-a-Lago