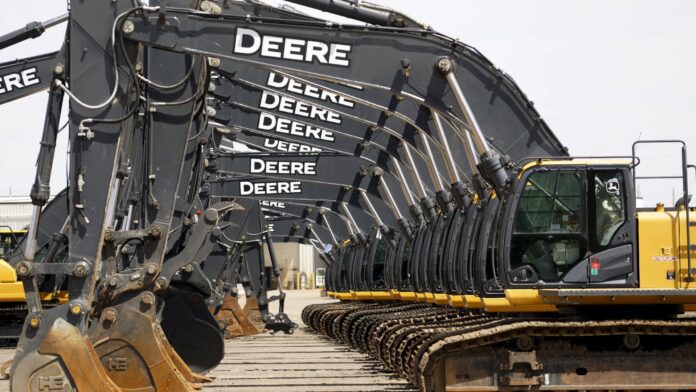 It’s time to buy Deere ahead of earnings next week as the outlook looks brighter than expected, according to Evercore ISI. Analyst David Raso named Deere a new top five favorite in his industrial machinery universe, upgrading the stock to buy from neutral as price and cost pressures ease for the agricultural machinery company. As part of the same call, Raso said to swap into Deere from Paccar, which he cut to neutral from buy. “The restraint on ag equipment industry production was confirmed by recent results/comments from the other two leading ag equipment manufacturers CNHI and AGCO. At the same time, they also confirmed that indeed recent orders for ’23 are solid. What they also did provide, though, was stronger price-cost than we expected (CNHI price-cost improved significantly during 2Q, now providing meaningful margin expansion),” Raso wrote in a Thursday note. “Thus, we are more comfortable with Deere’s ability to achieve numbers in its earnings report next Friday as upside in price-cost could overpower potentially restrained high horsepower (`large’) ag production 1H22 to 2H22,” he added. The analyst worried macro challenges would remain an overhang on the stock, as grain prices declined in June and July. Deere struggled with production issues in its calendar first quarter, leading to a revenue miss that sent shares tumbling after its earnings results in May. However, the analyst was reassured by strong demand for agricultural equipment. “That combined with our expectation of hearing strong order books are developing for ’23 large ag and Deere Construction & Forestry demand remaining robust into ’23 given it’s well positioned for a U.S. infrastructure bill amid low dealer inventories/depleted dealer rental fleets overpowering U.S. residential construction angst,” he added. The analyst raised his Deere price target to $416 from $401, or about 15% above where shares were trading Thursday around $363. Shares jumped nearly 3% in Thursday morning trading. Evercore also lowered its investment opinion on Gates Industrial, to neutral from buy. —CNBC’s Michael Bloom contributed to this report.

Seagate will cut 3,000 employees in latest sign of major PC and cloud slowdown