By ending national abortion rights, Supreme Court lights a fire in the 2022 election 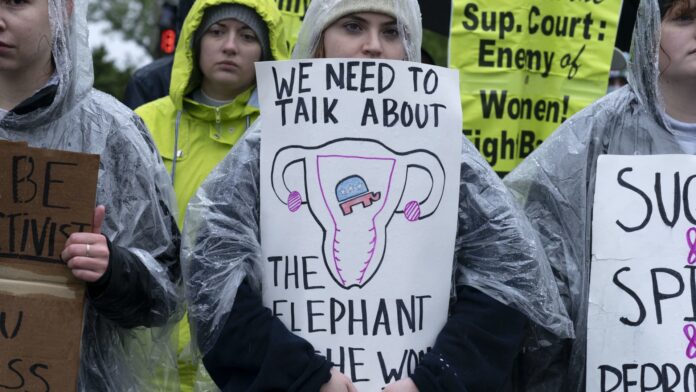 Pro-abortion demonstrators rally for abortion rights outside of the US Supreme Court in Washington, DC, on May 7, 2022.

The Supreme Court’s ruling Friday to eliminate the broadly supported constitutional right to abortion ignited a political firestorm in an already heated election year, landing less than five months from a slew of contests for Congress, statehouses and governor.

The Supreme Court’s historic decision enables states to ban abortion. It also allows Congress to outlaw abortion nationally, for the first time in a half-century, giving the winners of the 2022 elections new powers to determine whether abortion stays legal.

Democrats vowed political revenge at the ballot box, with President Joe Biden immediately seeking to channel the backlash by urging voters to put Democratic candidates in power so they can maintain a woman’s right to end a pregnancy.

“Voters need to make their voices heard. This fall, we must elect more senators and representatives who will codify a woman’s right to choose into federal law once again. Elect more state leaders to protect this right,” Biden said. “This fall, Roe is on the ballot. Personal freedoms are on the ballot.”

“You can have the final word. This is not over,” he said.

Nationwide, public support for keeping abortion legal in all or most cases hit a new high of 60% in a May poll by NBC News, in anticipation of the Supreme Court decision. By contrast, 37% said abortion should be illegal in most or all cases.

“The MAGA Republicans want to criminalize abortion in all 50 states, and the Supreme Court decision makes that possible with one law if they take control of the Congress,” Rep. Sean Patrick Maloney, D-N.Y., who chairs the Democratic House campaign arm, told reporters Friday. “Democrats are going to protect Roe v. Wade. That’s the choice. It’s that simple.”

‘What’s at stake in this race’

Republicans, who built the court’s new 6-3 conservative supermajority, had a split reaction to the ruling, with some celebrating the end of Roe v. Wade while others battling in competitive 2022 races downplayed its impact on the election.

“This is an historic victory for the Constitution and for the most vulnerable in our society,” McConnell, who is hoping to win Senate control this fall, said in a statement. McConnell and other GOP strategists highlighted the need to outlaw late-term abortion, a subcategory of the larger issue that polls in their favor.

But in Nevada, GOP Senate nominee Adam Laxalt said the ruling shouldn’t matter to voters because abortion is legal in the state.

“The people of Nevada have already voted to make abortion rights legal in our state and the Court’s decision on Roe doesn’t change settled law and it won’t distract voters from unaffordable prices, rising crime or the border crisis,” Laxalt said in a statement.

The contrast in battleground states was stark, with Democrats moving to highlight the ruling and impact on November.

“If there were any doubts left about what’s at stake in this race, it became crystal clear today. The right to an abortion will be on the ballot this November in Pennsylvania,” Pennsylvania’s Democratic Senate nominee John Fetterman said in a statement, drawing a distinction with his Republican rival, Mehmet Oz. “I will protect abortion rights. Dr. Oz will take them away. It’s that simple.”

Also in Pennsylvania, Democratic nominee for governor Josh Shapiro is running an ad highlighting GOP rival Doug Mastriano’s support for outlawing all abortion, including in cases of rape and incest, decrying him as too extreme for the commonwealth.

A split reaction from Republicans

Republican officials believed to have higher aspirations — including Sen. Josh Hawley, R-Mo., and Sen. Tom Cotton, R-Ark. — unambiguously hailed the court’s ruling to ax abortion rights. But other conservatives were quick to downplay the prospects of a nationwide ban or criminalization of abortion, recognizing the unpopularity of such a move.

“This ruling does not create a federal ban on abortion, as has been suggested by some of my colleagues,” Sen. Shelley Moore Capito, R-W.Va., said in a statement, vowing to “oppose extreme legislation at the federal level” and suggesting it should be left to states.

Currently, Congress is deadlocked on the issue, lacking the votes to either codify or further restrict abortion nationally. Democratic-led legislation to enshrine Roe v. Wade protections has passed the House but lacks a path to passing the evenly split Senate.

The Supreme Court’s ruling prompted a rare joint statement from the leaders of the Democratic National Committee and the party’s campaign committees for House, Senate and governor proclaiming that the “stakes of November’s elections could not be higher.”

“With Republicans in power, states could make abortion illegal without exceptions for rape, incest, and the life of the mother, and women and doctors could be charged with a crime if they have or perform an abortion,” they continued.

“Today’s decision, which is the biggest WIN for LIFE in a generation, along with other decisions that have been announced recently, were only made possible because I delivered everything as promised, including nominating and getting three highly respected and strong Constitutionalists confirmed to the United States Supreme Court,” said Trump, who has kept the door open to running again in 2024.

CNBC Chairman Mark Hoffman to step down in September