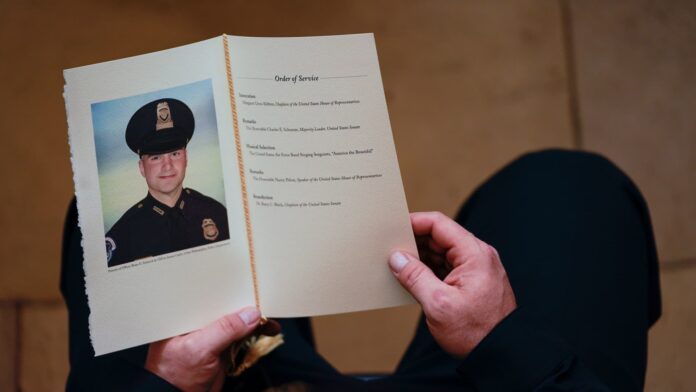 WASHINGTON — A Donald Trump supporter pleaded guilty on Thursday to assaulting the late Officer Brian Sicknick, who died after the Jan. 6 attack.

Julian Khater, 33, pleaded guilty to two counts of assaulting law enforcement officers during a virtual court appearance on Thursday before Judge Thomas Hogan. Khater admitted that he sprayed two officers in the face with the chemical irritant: Sicknick, and U.S. Capitol Police Officer Caroline Edwards. Sentencing was set for Dec. 13.

The charges come with a sentence of up to 20 years in prison, although under sentencing guidelines his sentence would likely be between 78 to 97 months in federal prison.

Khater was arrested in New Jersey in March 2021 and originally charged with assault on a federal officer with a dangerous weapon, conspiracy to injure an officer, civil disorder, obstruction of an official proceeding, and several misdemeanors.

Sicknick died of natural causes after the Jan. 6 attack, but the medical examiner said that what transpired during the attack played a role in his death.

The U.S. Capitol Police said after the medical examiner’s finding that Sicknick “died in the Line of Duty, courageously defending Congress and the Capitol.” The death of D.C. Metropolitan Police Officer Jeffrey Smith by suicide days after Jan. 6 was also declared a line-of-duty death earlier this year.

More than 850 people have been charged in connection with the Jan. 6 attack, and more than 350 have pleaded guilty. There are hundreds more arrests to come.

Share
Facebook
Twitter
Pinterest
WhatsApp
Previous article
For cobots, hype got ahead of the tech, but the future is coming fast
Next article
Russia’s energy influence over Europe ‘is nearly over’
RELATED ARTICLES
USA