HomeInvestingCarl Icahn has reportedly made a boatload betting against GameStop and is...
Investing 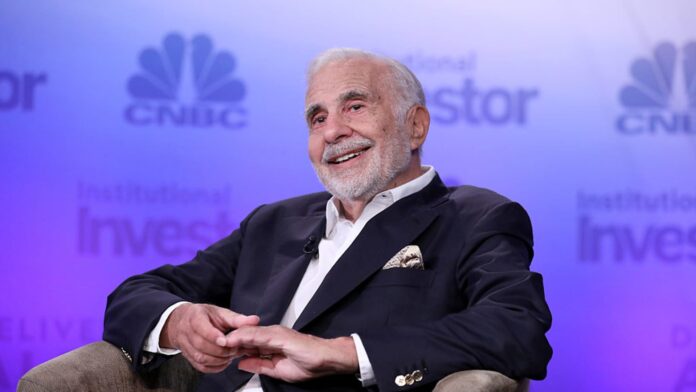 Activist investor Carl Icahn has reportedly made a successful short bet against meme stock GameStop , and still owns a large bearish position in the struggling retailer. Icahn began building the short position at the height of the meme stock mania in 2021 when GameStop hit a peak of $483 a share, Bloomberg News reported, citing sources familiar with the matter. The investor has increased his bet from time to time and is still short the stock, Bloomberg reported. A spokesperson for Icahn didn’t immediately respond to CNBC’s request for comment. The size of his position is not clear. GameStop made Wall Street history by being in the center of a trading frenzy driven by retail investors who coordinated trades on social media platforms. Shares skyrocketed, inflicting huge pain on a few hedge funds who had been shorting the brick-and-mortar retailer. The video game retailer has since lost more than 70% of its value from its all-time high in January 2021. The stock slid more than 8% Monday to close at $25.16 a share. The company executed a four-for-one stock split earlier in 2022. On the overall market, the famed investor recently said he remains negative and believes a recession is on the horizon. “We keep our portfolio hedged,” Icahn said on CNBC’s ” Closing Bell Overtime ” earlier this month. “I am still very, quite bearish on what is going to happen. … I still think we are in a bear market.” Icahn said he holds the belief that inflation is here to stay for the long term, pressured by structural wage increases. The billionaire investor previously revealed that he continued to bet against malls, a position he’s held since before the pandemic began as he bet on owners failing to pay or service their debt. Icahn said he took a very large position on shorting the malls through the CMBX index, which tracks the health of the commercial real estate market through its holdings of commercial mortgage-backed securities. Sophisticated investors like Icahn can buy and short derivatives tied to the index. On the long side, Icahn took a $721 million stake in beverage-can maker Crown Holdings last quarter, making it one of his top holdings. Icahn is reportedly pushing the company to divest or spin off noncore assets to focus on the beverage-can business and believes more stock could be repurchased. He also held onto his sizable stakes in energy names at the end of September, including CVR Energy, FirstEnergy and Occidental Petroleum , according to a new regulatory filing. The filing doesn’t disclose short positions. — Click here to read the Bloomberg News story.

Trump sues Jan. 6 committee to avoid testifying in the investigation