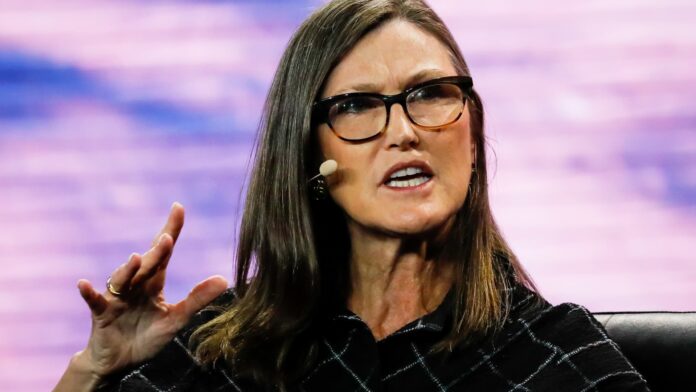 Ark Invest’s Cathie Wood said growth stocks should soon take the leadership in the market as the downturn runs its course. “Typically growth stocks will outperform as we move towards the end of a bear market and of a recession because they are the new leadership,” Wood said on CNBC’s “The Tech Trade Special” Friday. Wood’s disruptive technology darlings have been among the biggest losers this year in the face of rising rates. Her flagship active fund Ark Innovation ETF (ARKK) is off 52% year to date with its big holdings like Roku tumbling 70% this year. However, ARKK just posted its first monthly gain since October. “It looks like, at least so far, we bottomed on an intraday basis based on our flagship strategy on May 12. We actually bottomed before the Nasdaq and the S & P did,” Wood said. “That was an early signal that we might be turning the corner here.” The innovation investor has been calling for a recession for quite some time largely based on a surge in excess inventories. She noted so far this earnings season, it seems obvious that the downturn is upon us. “What we do see in these earnings results is that we are in a recession,” Wood said. “We think it is coming through loud and clear. We’ve seen advertisers cut back dramatically.” Contrary to conventional wisdom, she’s been warning of deflationary forces emerging even as the Federal Reserve rushes to hike rates to tamp down soaring prices. The Fed enacted its second consecutive 0.75 percentage point interest rate increase this week. Wood believes the central bank could be making a policy mistake by raising rates aggressively as inflation starts to peak. She previously said the Fed will be forced to make a policy reversal due to deflationary forces. “Within the next year, the Fed will relax its policy,” Wood said. “The recession might be sustained if it continues to raise rates and the yield curve continues to invert.” Added Roku Wood has been busy buying the dip in some of her darlings this earnings season. She revealed that she added to her Roku stake Friday amid a 23% sell-off on disappointing results. “This is a play on the move from linear TV to digital TV, streaming technology,” Wood said. “Sports are moving into streaming and connected TV markets.” She also picked up more Teladoc and Shopify shares this week after earnings-triggered declines. As for Coinbase , Wood trimmed her stake this week after reports that the crypto exchange is facing a probe. However, Wood said the trade was to raise cash to buy Shopify on the dip the same day. The investor said she is still long-term bullish on Coinbase, seeing the regulatory risk overblown. Shares of Coinbase have sold off a whopping 75% in 2022. “They will evolve their strategy to register with the SEC eventually,” Wood said. “Just like with the derivatives market, it was the same kind of controversy and the same kind of discussion among various agencies, and they worked it out over time. I think that will be the case with Coinbase as well.”

These stocks tend to beat and trade higher