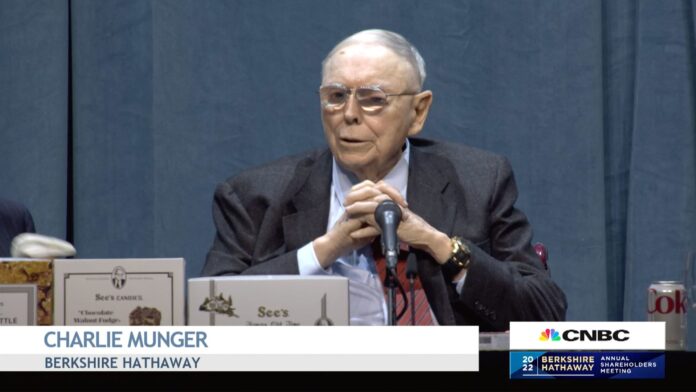 Berkshire Hathaway Vice Chairman Charlie Munger said he believes fossil fuels and renewables both have an important role to play in the world. “I think we’re going to be using fossil fuels for a long time ahead, because we have to,” the 98-year-old investor said in an interview with the Australian Financial Review on Tuesday. “If you stop to think about it, the present population of the world couldn’t eat if we didn’t use natural gas to create nitrogen fixer fertilizer,” Munger, Warren Buffett’s longtime business partner, told the newspaper. “We’re not going to get rid of fossil fuels, we’re just going to use less of them.” While Munger remains a firm supporter of fossil fuels, he is also optimistic about the future for renewable energy, noting that Berkshire is one of the biggest creators of renewable energy in the U.S. The conglomerate has experienced pressure from activists to detail how climate change affects its businesses. “I also think more of the world’s power generation will come from renewables. Both things are going to happen,” Munger said. “In Iowa, where we own most of the electric utilities, way more than half of all electricity generation comes from renewables.” His comment on the future of energy shed some light on Berkshire’s recent increase in its Occidental stake as well as a big bet on Chevron . The conglomerate has been steadily adding to its Occidental stake over the past few months. The latest purchases from the end of last week were for $112 million, giving Berkshire a 19.4% Occidental stake worth about $10.9 billion. The bet is edging closer to a 20% threshold where it could record some of the oil company’s earnings with its own, known as the equity method of accounting. Occidental has been the best performer on the S & P 500 this year on the back of surging oil prices. The stock has more than doubled in 2022. Meanwhile, Berkshire also added to its Chevron bet significantly, up to a stake worth $25.9 billion at the end of March, making the energy stock one of the conglomerate’s top holdings. Munger pointed out that Chevron has a few massive projects in Australia, including Western Australia’s Wheatstone project, the North West Shelf LNG operation and the Gorgon gas project. “Chevron is very good at that kind of engineering and it was very desirable to Australia to get that wonderful natural gas,” Munger said. “But it required a certain amount of patience on Chevron’s part. That thing was very expensive.” Munger had just taken a personal stake in a little-known Melbourne-based investment company Stonehouse Corporation that he said successfully emulates Berkshire’s conglomerate model, AFR reported Tuesday. Berkshire Hathaway is betting on wind, solar and hydro energy through its BHE Renewables unit based in Iowa and in its overall investing interest in utilities.