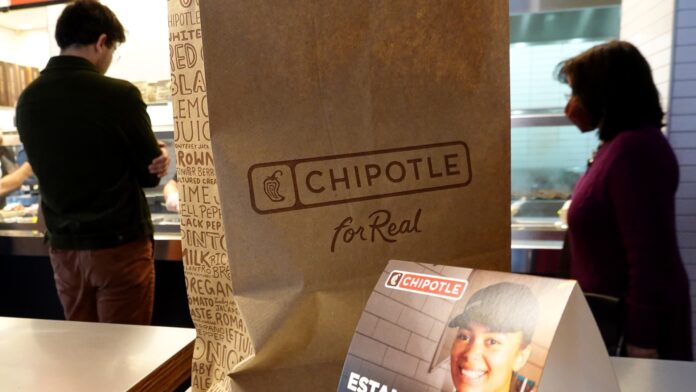 People visit a Chipotle restaurant on February 09, 2022 in Miami, Florida.

The company also said it would raise prices again in August, indicating that costs keep rising for its restaurants.

Shares of Chipotle rose more than 6% in extended trading.

Here’s what the company reported:

The burrito chain reported second-quarter net income of $259.9 million, or $9.25 per share, up from $188 million, or $6.60 per share, a year earlier. The company said it faced higher costs for key ingredients like avocados, beef and dairy, which offset the benefit from price increases.

Net sales climbed 17% to $2.21 billion. Same-store sales rose 10.1% in the quarter as consumers resumed ordering their burritos and tacos at Chipotle restaurants. Wall Street was expecting same-store sales growth of 10.9%, according to StreetAccount estimates.

Only 39% of transactions during the quarter came from digital orders. Delivery orders fell slightly, which helped Chipotle’s margins. While many customers love the convenience of delivery, third-party companies like Doordash charge Chipotle commission fees on every order, weighing on its profits.

Looking to the third quarter, Chipotle is projecting same-store sales growth in the mid- to high-single digits. The forecast includes next month’s planned price increases.

During the second quarter, Chipotle’s board approved an additional $300 million to repurchase shares of the company.

Liz Truss wants to review the Bank of England’s mandate