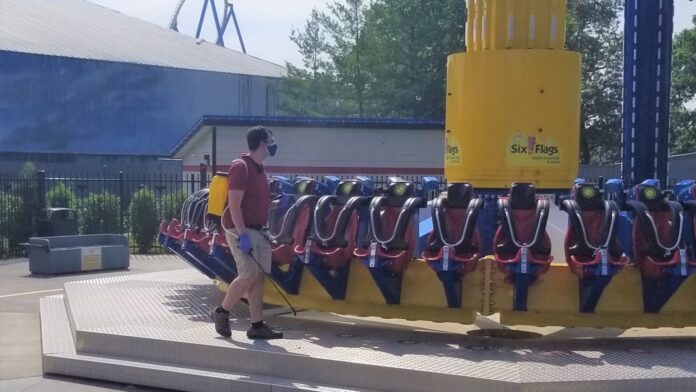 Citi is lowering expectations for theme park Six Flags citing sliding attendance, higher prices and the threat of inflation and a potential recession. The firm on Friday downgraded Six Flags to neutral from buy and lowered its price target for the stock to $26 from $41. The stock shed nearly 5% in premarket trading Friday and is down nearly 45% year-to-date through Thursday’s close. “We are lowering our estimates not only based on troubling visitation data for the month of June but also the increasing likelihood that this is less a one-off anomaly and more likely a response from the SIX customer to higher prices and across-the-board inflationary pressure,” Citi analyst James Hardiman wrote in a Friday note. Citi also lowered its price targets for Cedar Fair to $55 from $67 and SeaWorld to $52 from $62, but maintained ratings of buy and neutral, respectively. “While we continue to like the theme park industry’s ability to mitigate losses even in the event of a recession, we are beginning to see signs of weakness across the industry, with the month of June particularly problematic,” said Hardiman. “Given the substantial underperformance of these stocks over the past few months, it is certainly arguable that this deterioration is already priced into these stocks, and yet consensus estimates would seem to suggest significant risk to numbers headed into 2Q earnings season.” Industrywide foot traffic looks down for June, according to the note, particularly at Six Flags which saw a dip of about 38%. The slowdown in visitors happened even amid weather that has been “almost universally positive” for the theme park. That’s a bad sign, given that more than half of estimated full-year industry attendance falls in June, July and August. Given the trend, Citi lowered its second quarter attendance estimate to just 7.4 million visits, a 30% decline from 2019. In addition, Six Flags changed its ticket pricing strategy this year and pivoted to raising prices to trade off attendance for higher ticket yields. “As a result, even though SIX shares have been hit quite hard over the past few months, we are taking a step back from our Buy rating until we have a better indication as to whether or not the new pricing strategy is working as anticipated or whether it is likely to backfire amidst an extremely uncertain consumer environment,” Hardiman wrote.

After Davos, going ‘long’ on optimism in an anxious world