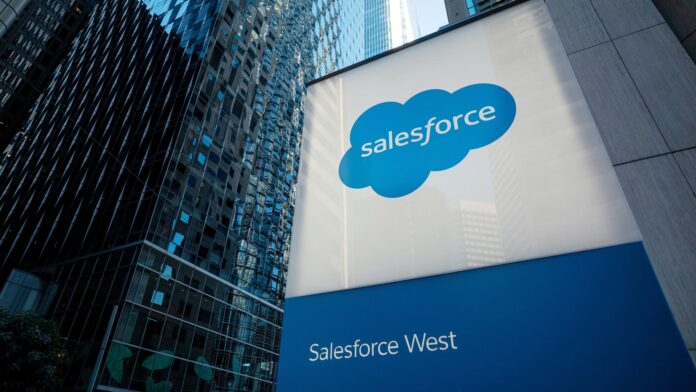 The outlook looks foggy for Salesforce as the software giant adjusts to a new normal after years of record growth, according to Cowen. Given this backdrop, analyst Derrick Wood downgraded shares of the cloud platform provider to market perform from an outperform rating, saying that a slew of recent executive departures and a slowdown in growth will weigh on shares at least in the medium-term. “With several recent exec departures & a major restructuring underway, we expect to see elevated levels of disruption risk,” Wood wrote. “Combined with tougher macro conditions & our concern of CRM customer spending behavior during renewals, and we expect more uneven growth execution in the qtrs ahead.” Salesforce this month announced plans to let go 10% of its workforce and cut costs, joining several other high-profile technology giants that have trimmed headcount in recent weeks following years of unparalleled growth. The company also announced late last year the departure of co-CEO Bret Taylor and Slack founder and CEO Stewart Butterfield . Technology stocks across the board face pressure from high interest rates and a difficult macro environment. Plus, the changing tides may force many customers to trim budgets as they grapple with the effects of this slowdown. Weaker spending during renewal periods may mean subscriptions for “nice to have” products such as Slack are cut, Wood said. Woods trimmed Cowen’s price target on Salesforce to $160 from $175 a share, reflecting just 9% upside from Thursday’s close. Shares fell about 1% before the bell Friday. “After a long cycle of high growth through both organic & inorganic efforts, Salesforce has reached greater market penetration and is entering a more mature growth phase,” Wood wrote. “This is causing the company to shift its focus to cost rationalization and margin leverage & we see significant [long term] margin potential in the ~30-35% range.” — CNBC’s Michael Bloom contributed reporting

Ukraine security guarantees will not be same as for NATO member, Scholz says