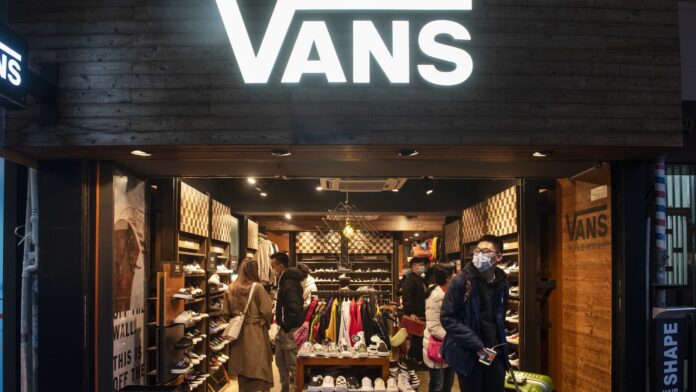 There’s trouble ahead for VF Corp. , according to Cowen. Analyst John Kernan downgraded the Vans and North Face parent to market perform from outperform and cut its price target to $50 from $52. The new target implies upside of nearly 10% from Friday’s close. “We see uncertainty related to management’s guidance and Vans re-acceleration that is implied by consensus estimates into FY24 as digital trends that we track for Vans remain tepid,” Kernan wrote in a Monday note. “Consensus assumption for margin expansion through FY24 seems lofty.” A large inventory that grew 92% year over year is part of the problem, according to Kernan. At the same time, there’s global macroeconomic uncertainty, foreign exchange troubles, markdowns, products and sourcing costs potentially pressuring the company. “We continue to see rising product costs and disruption related to working capital across the entire sector, which renders sales and gross margin modeling challenging,” Kernan wrote. “As we update our model we now see more difficulty in achieving consensus gross margin and EBIT margin expansion beyond FY23 and into FY24 (where consensus assumes a return to FY22’s five-year peak in EBIT margin of 13.1%).” The company’s buyback program could also be under pressure as it has to pay a hefty tax going forward. That’s weighing on earnings per share estimate for Cowen, pushing them further under Wall Street consensus for the shoe brand. Lastly, competition in the footwear space has increased, which could weigh on shares going forward. “Google Search trends for Vans are significantly below 2019 levels through August,” Kernan wrote. “Vans’ exposure to China recovery and Europe macro also create more uncertainty.” —CNBC’s Michael Bloom contributed to this report.

Americans Over The $600 Threshold On Payment Apps Must Report It

Americans Over The $600 Threshold On Payment Apps Must Report It

These resilient stocks that keep expanding margins are Goldman’s picks

the case for anti-ESG ETFs

WHO warns ability to identify new Covid variants is diminishing