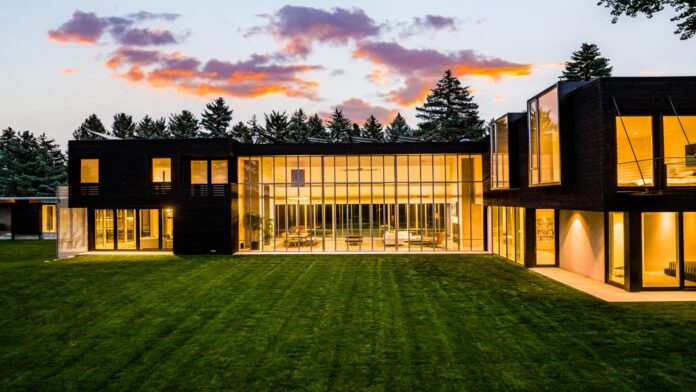 A multi-tiered sundeck connects the main house on the right to a poolside structure on the left both overlook a 75-foot lap pool.

A modern residence just outside of Denver listed Monday for $28,888,888, which makes it the most expensive home for sale in the metro area.

According to co-listing agent Jared Blank, the string of eights in the asking price, a lucky number in Japanese culture that symbolizes growing prosperous, pays homage to the traditional Asian technique used to torch the home’s exterior to turn it charcoal black.

“We believe the inclusion of eights will help market the home to exude a symbol of prosperity,” said Blank, who is a managing partner at The Agency Denver.

Much of the facade is clad in sustainably sourced Radiata Pine, which is naturally a light-colored wood. According to a representative of Alvarez Morris Architectural Studio, the blackened finish was achieved by exposing the wood to a hot flame until it charred, leaving behind a finish that’s crackled and burnt. In other words, if the residence were a Denver steak, it would be served well-done.

A piece of wood at Delta Millworks is burned with a torch to give it a distinctive charred finish.

A close-up look at the unique flame-charred wood exterior of the $28,888,888 residence.

The charring process, done domestically by Delta Millwork in Austin, Texas, is reminiscent of traditional Japanese architectural technique called Shou Sugi Ban that uses a similar charring process to preserve wood in a thin layer of carbon. Much like a stain or sealant, the carbon protects the wood from rot, decay and insects.

The estate, which sits in the affluent Cherry Hills Village neighborhood about 11 miles from downtown Denver, spans a total of about 16,400 square feet. If it sells for anywhere near its asking price, it will break a local record for the region.

According to Blank, in the 1950s a coalition of residents in the area worked to prevent encroaching commercialization from disrupting the charm and open space of the pastoral-like village.

“Its beauty remains, and now it is one of Denver’s most affluent neighborhoods where many of Colorado’s wealthiest and famous call home,” said Blank.

Dusk view of the main house looking into the glass-encased great room.

According to public records, the area’s highest-priced sale was achieved in April when Denver Broncos quarterback Russell Wilson and his wife, singer and songwriter Ciara, reportedly paid $25 million for a 13,000-square-foot residence in the Cherry Hills Village.

The region’s second-highest sale for a detached single-family home was recorded in 2021 at $15.7 million for the residence next door to Wilson’s home. That sale also had a connection to the city’s NFL team: The home’s former owner was reportedly Mike Shanahan who coached the Broncos for 14 seasons.

“Denver continues to see record-breaking pricing, and there is a huge demand for a new caliber of residential product,” said co-listing agent Kacey Bingham, also a managing partner at The Agency Denver.

The main home’s great room includes 22 ft tall ceilings, polished concrete floors and a wall of floor-to-ceiling glass that opens to a view of the Rocky Mountains.

The local trend in Denver sales prices may bode well for the new $28.9 million listing. According to the Denver Metro Realtors Association’s September report, the average sale price of a detached single-family home in the area was up about 8% in August over last year, with listings averaging just 20 days on the market.

Blank and Bingham are bringing the highest-priced home in the Denver area to market while inflation’s on the rise and a recession looms, but they’re not sweating it. They believe their high-net-worth clientele turn to real estate as a hedge against such headwinds.

“Properties like this will continue to trade, especially as investors continue to seek out real estate as a preferred investment during a softening market,” Bingham said.

Here’s a look around the priciest home for sale in Denver:

The estate at 4001 E Quincy Ave., also known as Clearview Farm, spans nearly 15 acres with a 1.5-acre pond and unobstructed views of the Rocky Mountains. The land is zoned for agricultural and equestrian facilities.

The main house in the distance is connected by a sundeck to the poolside structure that overlooks a 75-by-12-foot lap pool.

“The rarity of 15 private acres presents many opportunities to expand the grounds for the equestrian aficionado, a private garden and farm, and more,” Blank told CNBC.

The pool and sundeck offer a view of the estate’s rolling green acreage.

The residence unfolds over two separate structures including an almost 13,800-square-foot main house with a multitiered sundeck and partially subterranean level that connects to a two-story poolside structure.

The main house includes five bedrooms and eight bathrooms. The primary suite comes with a pair of dressing rooms and glass doors that lead to a deck with views of the pool and the surrounding estate.

Along with a marble-clad ensuite bath, the sleeping quarters are equipped with an elevator that services all three levels of the home.

The view from above the lap pool and sundeck reveals an array of solar panels on the pool house roof.

There’s indoor parking for six cars across two garages, and the driveway is equipped with a snowmelt system.

One of the estates two garages.

Down the hill from the main residence is a 2,600-square-foot guest house, clad in the same distinctive charred-wood siding, with its own sundeck and parking court.

Exterior of guest house and sundeck.

Inside the two-story structure are two more bedrooms, one bath, a kitchen and a home office.

President Biden says a recession is ‘not inevitable’