HomeInvestingDeutsche Bank sees Tesla back above $1,100 on second half recovery
Investing

Deutsche Bank sees Tesla back above $1,100 on second half recovery 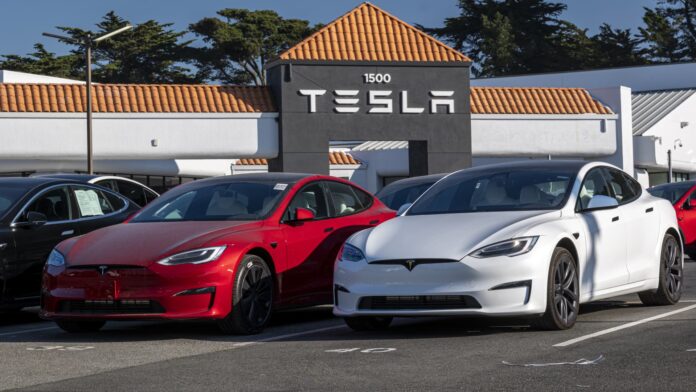 After a pullback in Tesla ‘s share price this year, Deutsche Bank says the EV maker’s stock looks attractive and should see a “sharp recovery” in the second half of the year. On Tuesday, the firm reiterated its buy rating on Tesla, keeping its price target on the stock at $1,125, which is about 65% above where it closed on Friday. Deutsche Bank said Tesla remains on track to deliver about 1.4 million units for the year, which would be a 50% increase from last year. That would be thanks in large part to contributions from new factories in Texas and Berlin and as China’s Covid lockdowns wane. It also highlighted Tesla’s strong pricing power. “Overall, we believe the company’s strong and accelerating growth profile — through new factory ramps, its widening technology (battery cells and [full self-driving]) and cost leadership — should support the above-average valuation,” analyst Emmanuel Rosner said in a note Tuesday. “While Q2 volume and margin will likely show pressure from Covid-related impacts in China and new factory ramp costs, the long-term trajectory remains intact and we expect the next 12-18 months to demonstrate considerable volume and margin improvement.” The call comes after Tesla reported 254,695 electric vehicle deliveries in the second quarter , which Deutsche Bank called “respectable.” Because of Covid lockdowns in Shanghai, that number was “unsurprisingly” lower than the 310,000 it delivered in the previous quarter, though it was roughly in line with consensus estimates of 256,520, according to FactSet-owned Street Account. It was also above Deutsche Bank’s previewed estimate of 245,000. Despite the second-quarter choppiness, and Tesla’s recent headcount reduction , the firm remains impressed by the stock. Rosner said its pricing power can “more than offset” inflation and help maintain the company’s “superior margin profile.” Pricing power describes the effect a change in the price of a product has on the demand for that product, and stocks with strong pricing power tend to outperform during and after periods of high inflation. “In 2021 alone, Tesla has conducted 10 price increases, followed by some more substantial raises in March and again in June this year. Both prices and vehicle waiting times are getting longer/higher, and not shorter, reflecting Tesla’s superior brand and product positioning,” Rosner said. “All in, our view is that Tesla remains the EV maker with superior margin profile through both pricing power and operational leverage,” he added.