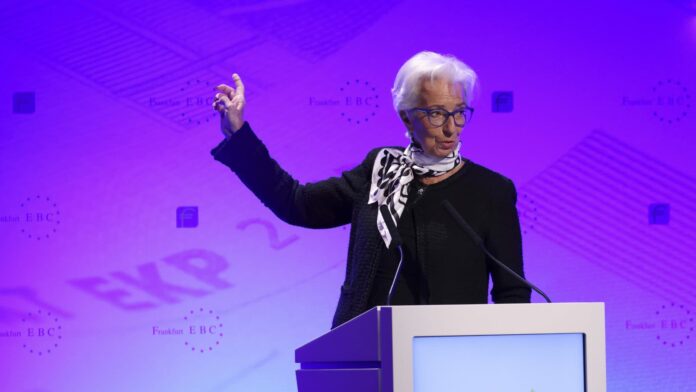 Christine Lagarde, president of the European Central Bank speaks at an event. The central bank is due to meet in mid-December for more monetary policy decisions.

The European Central Bank could be about to answer a lingering question in the coming weeks that could have major repercussions for financial markets.

At its December meeting, the ECB is set to discuss and reveal more concrete details on how it will unwind 8.8 trillion euros ($9.21 trillion) from its balance sheet — in a process known as quantitative tightening.

For years, the central bank has been ultra loose with its monetary policy, buying sovereign debt across Europe to keep borrowing costs low for governments and, subsequently, for individuals to help stimulate growth.

However, with inflation at record highs and a number of rate hikes under its belt, markets are now awaiting details on how and when the ECB will sell these bonds.

“The biggest question in December is what they’ll do regarding QT,” Marchel Alexandrovich, European economist at Saltmarsh Economics, told CNBC over the phone.

Back in October, ECB President Christine Lagarde said the discussions over bond sales will consider three main factors: the inflation outlook, the measures taken so far, and the transmission lag — given that it takes a while for any monetary decision to have an impact on the economy.

Speaking Monday, Lagarde confirmed the timeline. “In December, we will also lay out the key principles for reducing the bond holdings in our asset purchase program portfolio,” she told European lawmakers.

ECB officials have suggested that the process will be “gradual” and “predictable” — meaning it’s not likely to be meeting dependent.

At the moment, the central bank is applying a meeting-by-meeting approach to interest rate decisions, arguing there is a high degree of uncertainty preventing it from guiding the markets with more detail in the medium term.

“It is appropriate that the balance sheet is normalized over time in a measured and predictable way,” Lagarde said Monday.

As such, economists do not expect every detail to be outlined in December.

“In December, the ECB will lay out some general principals about how it intends to conduct QT but not yet specify the precise amounts and timings of the balance sheet run-off,” Franziska Palmas, senior Europe economist at Capital Economics, said via email.

APP started in mid-2014 to deal with persistently low inflation levels. It was frozen between January and October 2019 and then lasted until July 2022. On the other hand, PEPP was a more flexible bond purchase program introduced during the coronavirus pandemic.

As part of the broader stimulus actions, the ECB has been reinvesting profits it made during these asset purchases. Instead of starting to unwind its balance sheet by selling the actual bonds, some expect the ECB to stop these reinvestments.

“The ECB will shrink APP holdings only by ceasing to reinvest the proceeds of maturing APP assets, not by actively selling them. The pace of QT may be particularly slow initially, with the ECB still reinvesting the majority of the proceeds from maturing assets,” Palmas said.

Economists at Nomura also expect the ECB to slow down these reinvestments as a first step in reducing its balance sheet.

“We believe the ECB will allow only 1/3 of APP portfolio redemptions to be rolled off, with the remainder reinvested,” they said in a research note after the last ECB meeting. This is seen starting in the second quarter of 2023, according to the same note.

Frederik Ducrozet, the head of macroeconomic research at Pictet Wealth Management and an avid ECB watcher, said the bank “will probably introduce so-called caps on monthly reinvestments under the APP programme, up to which the ECB will stop reinvesting the proceeds of maturating securities.”

He added that this would likely start in March.

The ECB’s cumulative net purchases of government debt as of October 2022 stood at 2.74 trillion euros.

Goldman says to buy these energy stocks ahead of earnings