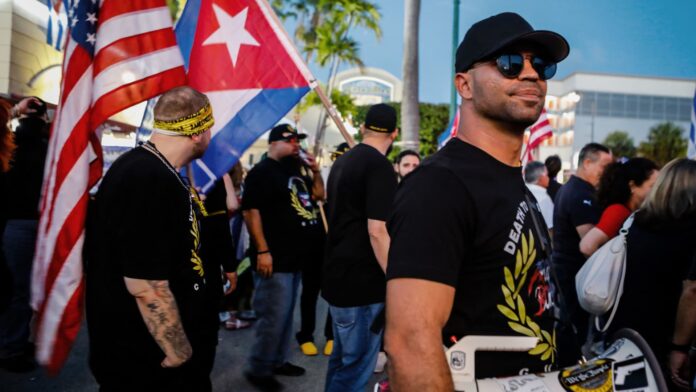 Henry “Enrique” Tarrio, leader of The Proud Boys, attends a protest showing support for Cubans demonstrating against their government, in Miami, Florida on July 16, 2021.

Enrique Tarrio and four other members of Proud Boys have been indicted by a federal grand jury on new seditious conspiracy charges related to the Jan. 6 attack on the U.S. Capitol.

Tarrio, who has twice been ordered detained pending trial, faces a superseding indictment along with Enthan Nordean, Joseph Biggs, Zachary Rehl, and Dominic Pezzola. Tarrio was previously charged in a conspiracy case.

The indictment alleges that Tarrio was aware of discussions around a plan to storm the Capitol on Jan. 6, and was involved in discussions about occupying buildings, including Capitol complex buildings.

Members of the right-wing Oath Keepers organization were previously indicted on seditious conspiracy charges, but this marks the first time the charges have been brought against members of the Proud Boys. The superseding indictment notes that Tarrio and Stewart Rhodes, the former head of the Oath Keepers, met in an underground garage on Jan. 5.

Tarrio communicated with an individual about a plan to occupy “crucial buildings” in D.C., including House and Senate office buildings, with “as many people as possible” to “show our politicians We the People are in charge.” Tarrio told the individual he was “not playing games,” the indictment alleges. That individual was not named.

“What would they do [if] 1 million patriots stormed the capital [sic] building. Shoot into the crowd? I think not,” another individual, described as “Person 3” in the indictment, wrote in a chat on Jan. 3. “They would do nothing because they can do nothing.”

The indictment also offers new details about what Tarrio was doing on Jan. 6 by including new messages that he exchanged with an unnamed individual that night.

“Brother. You know we made this happen… I’m so proud of my country today,” the unnamed individual wrote, according to the indictment.

The unnamed person then responds with “1776” and a profanity, a reference to the U.S. Revolution.

“The Winter Palace,” Tarrio responded, referencing the Russian revolution, according to the indictment.

“Dude. Did we just influence history?” the person later responded, before Congress had returned to certify the election results.

“Let’s first see how this plays out,” Tarrio replied, according to the indictment.

Wall Street pro predicts when the S&P 500 will rally

How to edit or unsend an iMessage on iPhone