HomeEuropeEuro zone inflation soars to a record 10%, piling pressure on the...
Europe 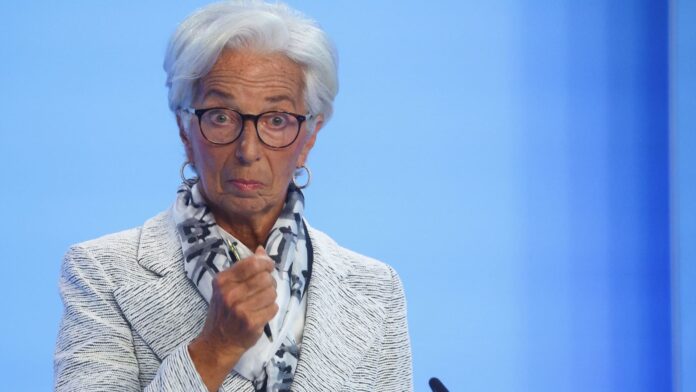 Euro zone inflation hit a new record high of 10% in September, Eurostat data showed on Friday, up from 9.1% in August and above consensus projections of 9.7%.

The reading also showed price increases broadening out from volatile food and energy prices into nearly all segments of the 19-member bloc’s economy.

However, core inflation, which excludes food and energy, climbed 4.8% on the year, up from 4.3% in August, and economists broadly expect the situation to get worse before it gets better.

Friday’s print will exert more pressure on the European Central Bank to hike interest rates aggressively at its October meeting, and increases the likelihood of a longer and deeper recession across the euro zone.

Seema Shah, chief global strategist at Principal Global Investors, said that while headline inflation may be at its peak, the continent’s situation remains deeply concerning.

“Indeed, while headline inflation may start to ease as a result of base effects and volatile energy prices, with the unemployment rate itself at a new low, core inflation is building momentum and is likely to rise further in the coming months,” she said in an email Friday.

Euro zone unemployment came in at 6.6% in August, unchanged from July and showing evidence that the labor market has remained resilient despite the impending recession and energy crisis sweeping the continent.

“With labor markets still tight and inflation gradually becoming more entrenched in the Euro area economy, today’s numbers will only embolden the ECB to focus solely on inflation, giving them a green light to introduce another sizeable policy rate hike – even as the economy rushes headlong into a tough winter and recession,” Shah said.

“The Euro area faces a particularly difficult dilemma. Not only is containing inflation largely out of the ECB’s reach due to its supply side foundations, but raising policy rates will only deepen the acute economic weakness which is beginning to engulf the region.”

Don’t ‘be a hero’ while the Fed battles inflation

The companies that have cut jobs this year