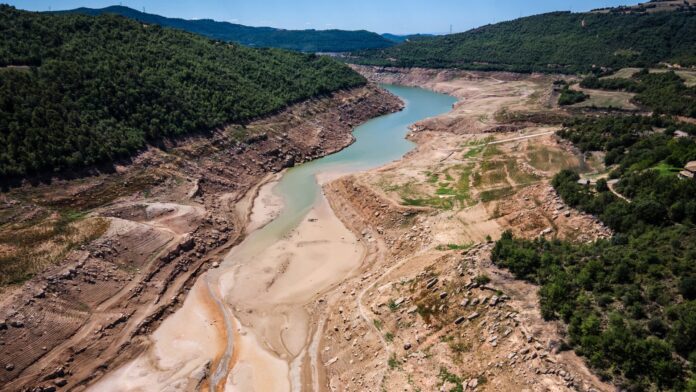 Extremely low water levels on the exposed bed of the Rialb reservoir during a drought in La Baronia De Rialb, Spain, on Tuesday, Aug. 23, 2022.

Europe is experiencing its worst drought in at least 500 years, with hot and dry conditions fueling wildfires, reducing crop yields and reducing electricity generation, according to a preliminary analysis from the European Union’s Joint Research Center.

The report from the European Drought Observatory said that 47% of Europe is under warning conditions, with a clear deficit of soil moisture, and 17% of the continent is under a state of alert, in which vegetation is impacted.

Record-breaking temperatures in Europe this summer have disrupted transportation, displaced thousands of people, and resulted in hundreds of heat-related deaths. The heat has also exacerbated wildfires, which have grown more destructive in recent years.

“The combination of a severe drought and heatwaves has created an unprecedented stress on water levels in the entire EU,” European Innovation Commissioner Mariya Gabriel said in a statement. “We are currently noticing a wildfires season sensibly above the average and an important impact on crops production.”

Wreckage of a World War Two German warship is seen in the Danube in Prahovo, Serbia August 18, 2022.

The Western Europe-Mediterranean region will likely see warmer and drier than usual conditions until November, the report said.

Climate change has made high temperatures and droughts more intense and widespread. And lower nighttime temperatures that typically provide critical relief from the hot days are disappearing as the planet warms.

Water and heat stress have slashed Europe’s 2022 crop yields, with forecasts for grain maize, soybean and sunflowers expected to be 16%, 15% and 12% below the average of the previous five years, respectively.

An aerial view shows boats in the dry bed of Brenets Lake (Lac des Brenets), part of the Doubs River, a natural border between eastern France and western Switzerland, in Les Brenets on July 18, 2022.

A lack of rainfall has also affected river discharges widely across Europe. Reduced water volume has hit the energy sector for hydropower generation and cooling systems of other power plants.

The consumer discretionary sector is outperforming this quarter. Here are analysts’ favorite names