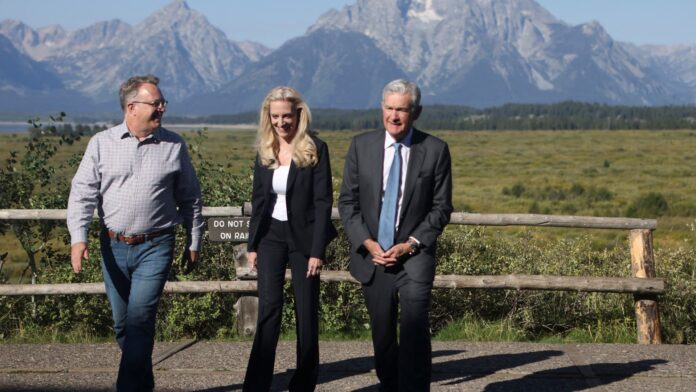 Federal Reserve Chair Jerome Powell proclaimed Friday that the central bank has an “unconditional” responsibility to ease inflation and expressed confidence that it will “get the job done.”

But a paper released at the same Jackson Hole, Wyoming, summit where Powell spoke suggests policymakers can’t do the job by themselves and actually could make matters worse with aggressive interest rate increases.

In the current case, inflation is being driven largely by fiscal spending in response to the Covid crisis, and simply raising interest rates won’t be enough to bring it back down, researchers Francesco Bianchi of Johns Hopkins University and Leonardo Melosi of the Chicago Fed wrote in a white paper released Saturday morning.

“The recent fiscal interventions in response to the Covid pandemic have altered the private sector’s beliefs about the fiscal framework, accelerating the recovery but also determining an increase in fiscal inflation,” the authors said. “This increase in inflation could not have been averted by simply tightening monetary policy.”

The Fed, then, can bring down inflation “only when public debt can be successfully stabilized by credible future fiscal plans,” they added. The paper suggests that without constraints in fiscal spending, rate hikes will make the cost of debt more expensive and drive inflation expectations higher.

In his closely watched Jackson Hole speech, Powell said the three key tenets informing his current views are that the Fed is primarily responsible for stable prices, public expectations are critical and the central bank cannot relent from the path it has drawn to lower prices.

Bianchi and Melosi argue that a commitment from the Fed simply isn’t enough, though they do agree on the expectations aspect.

Instead, they say that high levels of federal debt and continued spending increases from the government, help feed the public perception that inflation will remain high. Congress spent some $4.5 trillion on Covid-related programs, according to USAspending.gov. Those outlays resulted in a $3.1 trillion budget deficit in 2020, a $2.8 trillion shortfall in 2021 and a $726 billion deficit through the first 10 months of fiscal 2022.

Consequently, federal debt is running at around 123% of gross domestic product — down slightly from the record 128% in Covid-scarred 2020 but still well above anything seen going back to at least 1946, right after the World War II spending binge.

“When fiscal imbalances are large and fiscal credibility wanes, it may become increasingly harder for the monetary authority (in this case the Fed) to stabilize inflation around its desired target,” according to the paper.

Moreover, the research found that if the Fed does continue down its rate-hiking path, it could make matters worse. That’s because higher rates means the $30.8 trillion in government debt becomes more costly to finance.

As the Fed has raised benchmark interest rates by 2.25 percentage points this year, Treasury interest rates have soared. In the second quarter, the interest paid on the total debt was a record $599 billion on a seasonally adjusted annual rate, according to Federal Reserve data.

In his remarks, Powell said the Fed is doing all it can to avoid a scenario similar to the 1960s and ’70s, when surging government spending coupled with a Fed unwilling to sustain higher interest rates led to years of stagflation — or slow growth and rising inflation. That condition persisted until then-Fed Chair Paul Volcker led a series of extreme rate hikes that eventually pulled the economy into a deep recession and helped to tame inflation for the next 40 years.

“Will the ongoing inflationary pressures persist as in the 1960s and and 1970s? Our study underscores the risk that a similar persistent pattern of inflation might characterize the years to come,” Bianchi and Melosi wrote.

They added that “the risk of persistent high inflation the U.S. economy is experiencing today seems to be explained more by the worrying combination of the large public debt and the weakening credibility of the fiscal framework.”

“Thus, the recipe used to defeat the Great Inflation in the early 1980s might not be effective today,” they said.

Inflation cooled somewhat in July, thanks largely to a drop in gasoline prices. However, there was evidence of it spreading in the economy, particularly in food and rent costs. Over the past year, the consumer price index rose at an 8.5% pace. The Dallas Fed “trimmed mean” indicator, a favorite yardstick of central bankers that throws out extreme highs and lows of inflation components, registered a 12-month pace of 4.4% in July, the highest reading since April 1983.

Still, many economists expect several factors will conspire to bring inflation down, helping the Fed to do its job.

“Margins are going to fall, and that is going to exert strong downward pressure on inflation. If inflation falls faster than the Fed expects over the next few months — that’s our base case — the Fed will be able to breathe more easily,” wrote Ian Shepherdson, chief economist at Pantheon Macroeconomics.

Ed Yardeni of Yardeni Research said Powell didn’t acknowledge in his speech the role that Fed hikes and the reversal of its asset purchase program have had on strengthening the dollar and slowing the economy. The dollar on Monday hit its highest level in nearly 20 years compared to a basket of its peers.

“So [Powell] may soon regret having pivoted toward a more hawkish stance at Jackson Hole, which soon may force him to pivot yet again toward a more dovish one,” Yardeni wrote.

But the Bianchi-Melosi paper underscored that it will take more than a commitment to raise rates to bring down inflation. They extended the argument to include the what-if question: What would have happened had the Fed started hiking sooner, after spending much of 2021 dismissing inflation as “transitory” and not warranting a policy response?

“Increasing rates, by itself, would not have prevented the recent surge in inflation, given that [a] large part of the increase was due to a change in the perceived policy mix,” they wrote. “In fact, increasing rates without the appropriate fiscal backing could result in fiscal stagflation. Instead, conquering the post-pandemic inflation requires mutually consistent monetary and fiscal policies providing a clear path for both the desired inflation rate and debt sustainability.”

Share
Facebook
Twitter
Pinterest
WhatsApp
Previous article
Greenland ice loss will raise sea levels by nearly one foot: study
Next article
This uranium ETF is up about 20% over the past week. Here’s the scoop
RELATED ARTICLES
USA

What 5 key personal finance issues mean for you