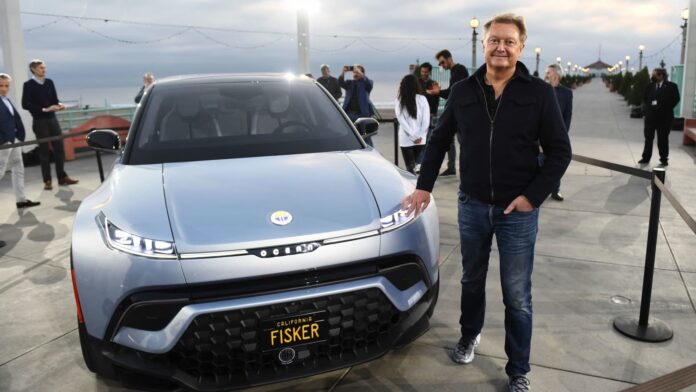 Henrik Fisker stands with the Fisker Ocean electric vehicle after it was unveiled at the Manhattan Beach Pier ahead of the Los Angeles Auto Show and AutoMobilityLA on November 16, 2021 in Manhattan Beach, California.

California-based EV startup Fisker said Wednesday it now has more than 56,000 reservations for its Ocean electric SUV, and confirmed that it’s still on track to start production in mid-November.

The announcements were part of Fisker’s second-quarter earnings report. Here are the key numbers:

CEO Henrik Fisker confirmed the company and its manufacturing partner, global auto supplier Magna International, are on track to begin production of the Ocean at a Magna-owned factory in Austria later this year.

Fisker and Magna have completed 55 Ocean prototypes as planned. All are currently undergoing final quality testing in preparation for the November launch, Fisker said.

The company had $851.9 million in cash remaining at the end of the second quarter, down from about $1 billion at the end of March but enough to complete development of the Ocean and fund its operations through at least the end of 2022, it said.

Fisker also confirmed that its second vehicle, a lower-cost model called the PEAR, will be built by Taiwan’s Foxconn Technology Group in the former Lordstown Motors factory in Ohio starting in 2024.

Fisker plans to launch a third model, a sports car called Ronin, in late 2024. It plans to show a prototype of the Ronin in mid-2023.

This is a developing story. Please check back for updates.

Target will cover employees’ travel to other states for abortions