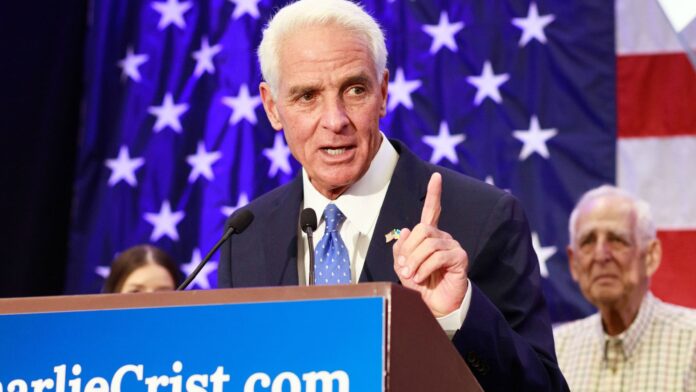 Democratic Rep. Charlie Crist announced Wednesday he will resign from Congress as he campaigns to unseat Florida’s Republican Gov. Ron DeSantis in November.

The move will shrink Democrats’ already-slim majority in the House, potentially complicating efforts to pass more legislation before the midterm elections when Republicans are currently favored to take control.

Serving in Congress “has been an honor and a privilege,” Crist said in a statement, which did not mention his campaign for governor. “From the bottom of my heart, thank you for trusting me as your Representative in Washington.”

Crist will step down by the close of business Wednesday, he said in the statement. Congressional staff for Crist’s district will provide casework and constituent services until the next representatives are sworn in in January, the statement said.

Florida’s 13th Congressional District, where Crist has served since 2017, is considered a likely pickup for Republicans this November, according to the nonpartisan Cook Political Report. The district’s political makeup shifted toward the GOP after a new congressional map, proposed by DeSantis, re-shaped the area.

Crist handily won the Democratic nomination for Florida’s gubernatorial race. But polls show him trailing DeSantis, a dominant figure in the GOP who is widely rumored to be gearing up for a 2024 presidential run.

DeSantis’ stature in the party is exceeded perhaps only by former President Donald Trump, who has regularly teased the possibility of launching another White House bid.

Crist’s move mirrors DeSantis’ decision in 2018 to resign from Congress as he campaigned for governor in a hotly contested race against Democrat Andrew Gillum. DeSantis at the time said that he did not want to be criticized for taking a U.S. representative’s paycheck while missing votes.