HomeInvestingGameStop's future, from one of the last analysts covering the chain
Investing

GameStop’s future, from one of the last analysts covering the chain 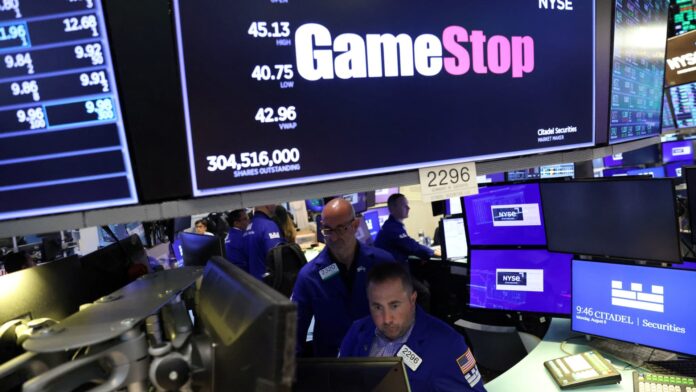 GameStop ‘s shares have seen another volatile year as meme stock traders once again place bets on the video game retailer that’s struggled to turn around its business. Most analysts have suspended coverage of the stock in recent years, but one of the last who still looks at GameStop says the stock could rally roughly 45% if it turns around its business and moves away from focusing on video game software. Jefferies analyst Stephanie Wissink trimmed her price target on GameStop to $26 a share in a note to clients Thursday, citing the company’s ongoing cash burn and uncertain long-term growth trajectory following the release of its second-quarter results. “We are encouraged that profitability improvement goals were set for coming quarters, a result of improved costs,” Wissink said. “GME has a passionate shareholder base, but in current market conditions, somewhat unclear LT growth prospects remain a key source of speculation & debate.” Wissink’s remarks come after GameStop reported a wider loss and declining sales in the second quarter, while announcing a partnership with FTX crypto exchange. That said, Wissink outlined three scenarios for the video game retailer. In her base case, Wissink expects the stock to rally 8% from Wednesday’s close, to $26 a share, partly from closing its least profitable stores. Pivoting toward digital, accessories and collectibles sales could boost shares by roughly 45%, to $35, in an upside case, she says. That scenario also anticipates a slowing decline in video game software and the closure of storefronts dragging down margins. It also accounts for the company leveraging growing interest in E-Sports. A third possibility is that, should sales continue decelerating and consumers adopt videogame downloads at a quicker clip than expected, Wissink believes the stock could collapse to $11 a share, or 54% below Wednesday’s close. Despite a leadership shift in recent months, GameStop has struggled to transform its business and boost profitability in an increasingly digital world. “Our thesis is simply that rebalancing sales away from video game software/hardware will deliver superior gross margins,” Wissink wrote, adding that moving toward a digital platform could also provide long-term benefits. Wissink rates GameStop a hold with a $26 price target, down from $27.50 previously. — CNBC’s Michael Bloom contributed reporting

From its founding in 2006 to Musk takeover