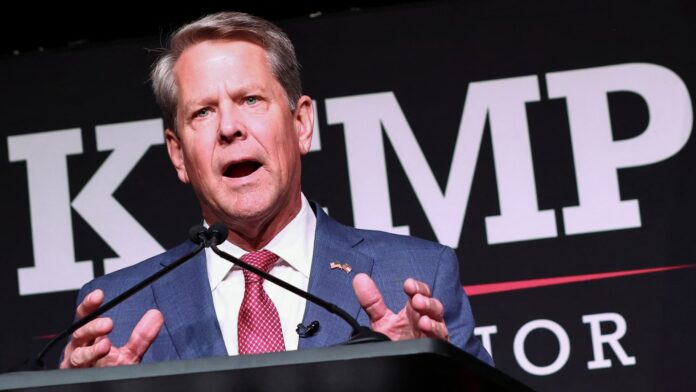 Governor Brian Kemp speaks after winning the Republican primary during his primary election watch party in Atlanta, Georgia, May 24, 2022.

A Georgia judge on Monday denied Gov. Brian Kemp’s bid to avoid testifying before the grand jury hearing evidence in a probe of possible 2020 election interference by former President Donald Trump and others, but said he doesn’t have to testify until after the November election.

“The governor is in the midst of a re-election campaign and this criminal grand jury investigation should not be used by the District Attorney, the Governor’s opponent, or the Governor himself to influence the outcome of that election,” Fulton County Superior Court Judge Robert McBurney wrote in his six-page ruling. “Once the election is over, the Court expects the Governor’s legal team promptly to make arrangements for his appearance.”

Kemp, a Republican who’s come under fire from former President Donald Trump for refusing his demands to help overturn Joe Biden’s win in the 2020 election, is facing Democrat Stacey Abrams in the Nov. 8 election.

“Judge McBurney acknowledged the potential political impact of the timing of these proceedings and correctly paused the Governor’s involvement until after the November election,” Kemp’s office said in a statement. “Just as we have since April 2021, we will work with the DA’s office and the judge to ensure a full accounting of the Governor’s limited role in the issues being investigated is available to the special grand jury.”

A special grand jury that had been empaneled as part of Fulton County District Attorney Fani Willis’ probe into 2020 election interference wanted to speak to Kemp about the pressure he received from the White House and others to overturn the results in the state, which Joe Biden won by a narrow margin.

The grand jury issued the subpoena for Kemp’s testimony earlier this month, after what McBurney described as weeks of “tortured and tortuous” negotiations for a voluntary interview. The judge said “both sides share responsibility for the torture and tortuousness.”

Lawyers from state Attorney General Chris Carr’s office had argued the subpoena should be quashed because Kemp had “sovereign immunity” but the judge disagreed, finding that only applies in civil actions and the special grand jury is conducting a criminal probe. Carr also alleged that Willis was pursuing Kemp’s testimony for improper political purposes (a charge the Democratic DA denied) and argued that if the judge allowed questioning to proceed, it should take place after the election.

Carr noted in court papers that because the grand jury was authorized through next May, the “conclusion of the investigation before the November 2022 election is unnecessary.”

McBurney agreed, finding “the sound and prudent course is to let the election proceed without further litigation or other activity concerning the Governor’s involvement in the special purpose grand jury’s work.”

In a separate ruling Monday, McBurney also denied a bid by lawyer Kenneth Chesebro to quash a subpoena for his testimony before the grand jury. The House committee investigating the Jan. 6 riot at the U.S. Capitol has said that Chesebro was a proponent of a plan to put forward “alternate electors” in states Trump lost, including Georgia.

In a court filing last month, Willis said that all 16 of the false electors in Georgia have been notified that they’re targets of her investigation.

Chesebro, who was subpoenaed last month, argued he shouldn’t have to appear before the grand jury because “the entirety of his expected testimony is protected by attorney-client privilege.”

McBurney agreed some of his testimony about his work for the Trump campaign would be privileged, but there were other areas that would not be off-limits, including his communications with Republican officials in the state and his “interactions with the individuals in Georgia seeking to prepare a slate of ‘alternate’ electors weeks after the final vote count showed former President Trump losing by over 10,000 votes.”

3 of our stocks, including Ford, are in the news. Here’s the Club’s take on the headlines