HomeUSAGinni Thomas-tied Facebook group 'FrontLiners for Liberty' could be a new focus...
USA

Ginni Thomas-tied Facebook group ‘FrontLiners for Liberty’ could be a new focus in Jan. 6 investigation 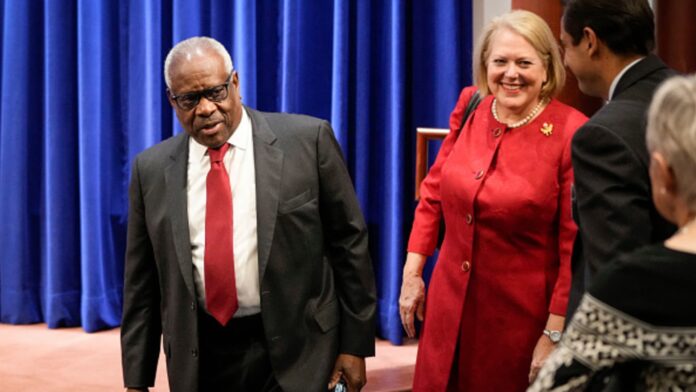 A Facebook group that appears to be run by Virginia “Ginni” Thomas, the wife of Supreme Court Justice Clarence Thomas, could become a new point of interest in the U.S. House Select Committee’s investigation into the Jan. 6 attack on the U.S. Capitol.

Congressional investigators said they planned to ask Ginni Thomas to testify before the committee hours after Trump attorney John Eastman on Thursday publicly posted a Dec. 4, 2020 email from Thomas asking him to speak to a gathering she called “Frontliners,” which she described as featuring “grassroots state leaders.” Ginni Thomas is listed as an administrator of a Facebook group that goes by a similar name and description: “FrontLiners for Liberty.”

The private group, which listed more than 50 members, was created in August 2020, just two months before the November elections, according to the page’s description.

The group, which CNBC reviewed before it was removed from public view, described itself as “a new collaborative, liberty-focused, action-oriented group of state leaders representing grassroots armies to CONNECT, INFORM and ACTIVATE each other weekly to preserve constitutional governance.” Although Thomas’ personal Facebook page isn’t verified, it contained numerous photos of Justice Thomas.

The group’s pages were removed from public view after CNBC reached out to Thomas about the organization. It now shows a notice from Facebook saying that it’s either been deleted or the privacy settings have been changed.

CNBC also tried to get answers through Facebook messenger to Stephanie Coleman, who is also listed administrator of the group and the wife of the late Gregory Coleman who was Texas’ solicitor general. Greg Coleman was once a clerk for Justice Thomas.

Coleman and Thomas are repeatedly pictured together on Coleman’s personal Facebook page, including a photo of the two together in December 2016 with former White House chief strategist Steve Bannon.

Thomas asked Eastman to speak to her Frontliners group on Dec. 8, according to her email to him. Eastman said Thomas “invited me to give an update about election litigation to a group she met with periodically,” according to his post on Substack, an email newsletter subscription service. Thomas told Eastman she was “on sabbatical until this election stuff is resolved.”

At the time, Trump and his allies were filing legal challenges against the 2020 election results after President Joe Biden was declared the winner. Trump and those close to him lost most of those lawsuits.

Thomas’ email to Eastman appears to be at issue in his legal dispute with congressional investigators looking into the Jan. 6 attack. A federal judge recently ruled against Eastman, who was trying to assert attorney-client privilege to withhold emails about the 2020 election. The judge ordered Eastman to turn over ten documents, including four that pertained to a meeting on Dec. 8, 2020, which was the same date Ginni Thomas asked him to speak to Frontliners. “Two emails are the group’s high-profile leader inviting Dr. Eastman to speak at the meeting, and two contain the meeting’s agenda,” U.S. District Judge David Carter wrote in his June. 7 order.

Based on the event’s agenda, Eastman discussed “‘State legislative actions that can reverse the media-called election for Joe Biden.’ Another speaker gave an ‘update on [state] legislature actions regarding electoral votes,'” Carter wrote.

Eastman, according to the Jan. 6 House select committee investigating the riot that took place about 17 months ago, tried to convince former Vice President Mike Pence that he held virtually unilateral power to overturn the election. Yet, according to Pence’s former counsel who testified at a Thursday Jan. 6 committee hearing, Eastman once told him that the Trump advisor’s own legal theory would be rejected 9-0 if it went before the Supreme Court.

The select committee said it plans to invite Ginni Thomas to testify about her correspondence with Eastman. Thomas told The Daily Caller that she was willing to testify. “I can’t wait to clear up misconceptions. I look forward to talking to them,” Thomas said. She reportedly supported efforts to overturn the 2020 election, sending text messages to Trump’s former chief of staff Mark Meadows that encouraged him to stand behind the then president’s false election claims.

A spokeswoman for the Supreme Court, a spokesman for the Jan. 6 House select committee, Thomas, Eastman and his attorneys did not respond to requests for comment.

The Frontliners group also worked with a conservative advocacy organization known as FreedomWorks, according to the nonprofit’s spokesman Peter Vicenzi. He also said that Thomas and FreedomWorks activists have been allies for years. FreedomWorks does not publicly disclose their donors.

“Frontliners for Liberty, it is yet another conservative grassroots organization that FreedomWorks partners with to advance our issue set,” Vicenzi said in an email. “Ginni Thomas, for years, has been an invaluable ally to our activist community when it comes to engaging on shared issues.”

Since Trump lost the election, FreedomWorks has pushed the idea that there needs to be election reforms. Conservative lawyer Cleta Mitchell, who used to work with Trump’s campaign, now chairs FreedomWorks’ multimillion dollar National Election Protection Initiative, according to Newsmax.

Merissa Hamilton, who says on her LinkedIn page that she’s a grassroots director at FreedomWorks, tweeted out in October a picture at what she described as an event at “FreedomWorks Frontliners for Liberty.” The picture showed Reps. Marjorie Taylor Greene, R-Ga., Louie Gohmert, R-Texas and Lauren Boebert, R-Colo. attending the event.

After CNBC emailed Hamilton about the tweets, they were deleted off her page. She did not return follow up requests for comment.