HomeEuropeGlobal outlook may be less bad — but we're still not in...
Europe

Global outlook may be less bad — but we’re still not in a good place: IMF chief 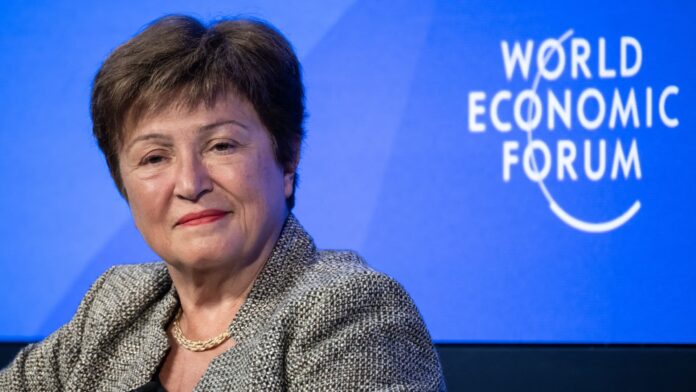 The global economic outlook is not as bad as feared a couple of months ago — “but less bad doesn’t quite yet mean good,” according to the managing director of the International Monetary Fund.

“We have to be cautious,” Kristalina Georgieva told a closing panel at the World Economic Forum in Davos moderated by CNBC.

She said headline inflation was heading down and China’s reopening was expected to boost global growth, with the IMF forecasting its economy will outpace global growth of 2.7% this year, at 4.4%, after slipping below it for the first time in four decades last year.

“Also what has changed in the positive is we have seen demonstrably the strength of labor markets translating into consumers spending and keeping the economy up,” she said.

However, she also highlighted ongoing risks, including China’s growth resulting in higher oil and gas prices and the “horrible” war in Ukraine harming global confidence, particularly in Europe.

And 2.7% global growth was still “not fabulous,” she added.

But Georgieva said her biggest note of caution was that labor markets could lose some of their current tightness, with interest rates yet to significantly bite.

“So we have to be thinking of possibly unemployment going up at a time when fiscal space in governments is very tight, there isn’t that much they can do to help people. And yet they would be pressed to do it.”

Turning to European Central Bank head Christine Lagarde, a speaker on the same panel, she said: “All power to you. If fiscal policy works against purpose with monetary policy, then you may have to tighten even further.”

‘Stay in the middle of realism’

Her message to business and policymakers was to “be careful not to get on the other side of the spectrum from being too pessimistic to being too optimistic. Stay in the middle of realism that seems to serve the world well.”

She then called on Davos attendees to fight global economic fragmentation.

“If we look at medium-term growth prospects, how we handle security of supply chains will matter tremendously on our future prospects of growth,” she said.

If diversification of supply chains to strengthen them is done “rationally” and collaboratively it may cost 0.2% of GDP, she said.

That could increase to a 7% loss of GDP, equaling $7 trillion, “if we are like an elephant in a china shop and we trash the trade that has been an engine for growth for so many decades,” she said.

“So a great deal of whether we can lift optimism depends on the people in this room. Be pragmatic, collaborate, do the right thing, keep the global economy integrated for the benefit of all of us,” Georgieva added.

Barclays downgrades Twilio, says it needs to focus on profits