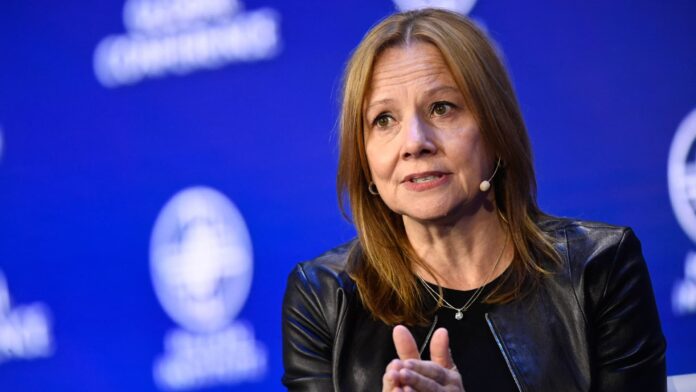 Mary Barra, Chair and CEO of the General Motors Company (GM), speaks during the Milken Institute Global Conference in Beverly Hills, California, on May 2, 2022.

The Detroit automaker said it expects net income during the second quarter to be between $1.6 billion and $1.9 billion and pre-tax adjusted earnings to be in the range of $2.3 billion and $2.6 billion.

Analysts expected GM’s net income to be about $2.5 billion during the second quarter, according to FactSet. GM did not previously provide a forecast for its second quarter.

Shares of the automaker were down by 2% after briefly being halted during pre-market trading, pending news.

The forecasts were part of a filing by the automaker disclosing that it has about 95,000 vehicles in its inventory that were manufactured without certain components as of June 30, a majority of which were built in June. GM said it expects that “substantially all of these vehicles” will be completed and sold to dealers before the end of 2022.

In addition to inflation and other macroeconomic factors, the global automotive industry has been battling supply chain problems caused by the coronavirus pandemic for more than a year — specifically, supplies of semiconductor chips that are used throughout vehicles.

The filing was released ahead of GM reporting its second-quarter U.S. sales, which were down 15.4% from a year ago