HomeEuropeGolf trips to top British courses are selling out this year and...
Europe 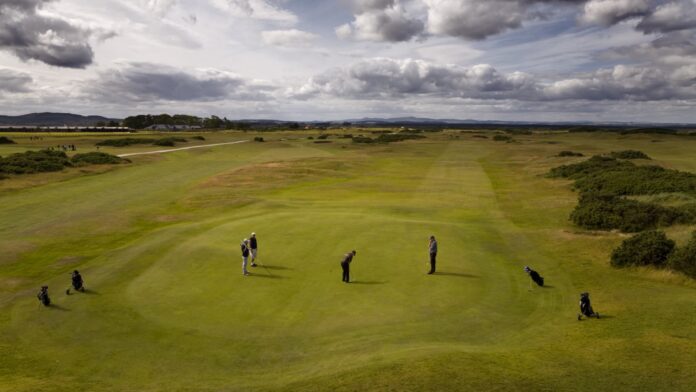 Travelers planning a golfing vacation to prestigious courses in the United Kingdom may need to act fast.

Some of the U.K.’s top venues are selling out, not just this year, but for spots — or tee times — in 2023, due in part to growing confidence in international travel among wealthy Americans.

Travelers are attracted by the chance to tee off at venues played by some of the game’s top players, and premium courses in proximity to one another make Scotland a particularly hot ticket.

Gordon Dalgleish, a Scot who has run U.S. tour operator PerryGolf for nearly four decades, says he’s never seen so much demand from Americans wanting to play upscale courses in Britain, such as the Old Course at the seaside town of St. Andrews and Muirfield, east of Edinburgh.

“These are the courses which are filling up far quicker than I have seen in 38 years. Some are already full,” he told CNBC by email.

PerryGolf has almost sold out of 2023 spots to play the Old Course, which hopes to host Tiger Woods at the 150th Open Championship in July. The star said in a tweet that he had pulled out of next week’s U.S. Open due to health issues, adding that he plans to be ready for the U.K. event.

Dalgleish said travelers are booking trips months earlier than usual, especially those who accumulated cash during the pandemic and are ready to spend.

“If you look at the kind of typical demographic of the American golfer, maybe mid to later in life in age, they’ve got vastly more money, and they’ve got less time than they had two years ago,” he told CNBC by phone.

Now, even well-known people with money to burn are being turned away, Dalgleish said. He said “A-list businesspeople” contact him but “simply don’t understand that [bookings] aren’t available,” he said.

It’s estimated that nearly 67 million people worldwide played 9- or 18-hole courses in 2021, a record high, and a figure that rose during the pandemic as people headed outdoors to sharpen their handicaps, according to The R&A, which governs the rules of golf for most of the world.

St. Andrews is home to seven courses, and the “Old Course” is where the sport of golf is said to have originated around 600 years ago. Jack Nicklaus won the the Open Championship, or “Open,” there in 1970 and 1978, and it’s known for features like the 700-year-old Swilcan Bridge and the 7-foot deep sand trap Hell Bunker.

The best way for overseas travelers to get a spot on the Old Course is via an authorized provider. U.S. firms PerryGolf and SGH Golf are on the list, as are others including the Scottish-based DP&L Golf.

Jack Nicklaus won the 1970 Open Championship held on the Old Course at St Andrews, Scotland. The course remains one of the most popular with American visitors.

However, if you’re prepared to take a risk, the Old Course operates a ballot for tee times 48 hours ahead of play. With half of spots allocated this way, the lottery system “enables golfers who are in the area to still have the opportunity to play,” according to its website.

Another option is to go solo. Single golfers, who show up on the day of play, are sometimes grouped with two or three other players.

Ian Murphy, a Brit who lives in the south of England and who said he takes three or four short golfing vacations a year, recommends contacting hotels or tourist boards like Visit Scotland to see whether they have available tee times. If not, it’s possible to soak up the atmosphere of the Old Course without playing it, he said.

What is a “links” course?

“Links” courses are the original style of golf course, originating in Scotland. The term “links” comes from the Old English word “hlinc,” which means ridge or rising ground, and refers to golf courses on the Scottish, Irish or English coast that are sandy and undulating. Such courses tend to be hard to play, as they are exposed to the elements, and differ from manicured parkland courses, which often have trees and man-made features.

“You can actually just walk around the golf course, and that’s nearly as good as playing it,” he said. “You can stay at a nice guest house in St. Andrews, spend half an hour just watching people tee off on the Old Course [and] have lunch at the clubhouse.”

Murphy — who has managed to play the Old Course three times in the past two years due to a lack of overseas bookings related to the pandemic — also recommends booking tee times out of season. Besides, he said, the weather in Scotland can be unpredictable, so going in high summer doesn’t guarantee sunshine.

Trump Turnberry, on the west coast of Scotland and the first course to host the Open in 1860, is a favorite of U.S. club professional Kyle Phelps.

“It is a layout that is challenging but allows you to be rewarded if you are playing well. The views are amazing and the fact that the halfway house is a lighthouse is absolutely spectacular,” he told CNBC via email.

The course has tee times available this summer, although some weekend spots have sold out, according to the club’s website.

The lighthouse stands among the ruins of the 13th-century Turnberry Castle, and Phelps, who is head golf professional at Rhode Island Country Club, said part of the appeal of Scottish courses is that their topography is different from the manicured courses in the United States.

The lighthouse at the Ailsa Course at the Trump Turnberry Resort. The Trump Organization bought the course in 2014.

Courses might feature burns, or streams, plus vast swaths of heather plants, double greens — which have two holes to play rather than one — and pot bunkers, which are small and deep unlike shallower sand bunkers, Phelps said.

The Trump Organization has owned Turnberry since 2014, and it claims to have spent 200 million pounds ($253 million) on its restoration. The ownership is not without controversy: Days after the attacks on the U.S. Capitol, the R&A, which organizes the Open, said it would not hold the championship at the club while it is owned by the former president’s company.

Dating to 1744, Muirfield will host the Women’s Open Championship in August. Reports have suggested that tee times for summer 2023 are fully booked, but a representative told CNBC that while May through September are in “high demand,” there are still some slots during this period, as well as in April and October of next year.

A woman plays golf at Muirfield, Scotland, in 2019, as the club opened its doors to women for the first time. It will host the Women’s Open Championship in August.

Playing multiple courses in one trip

Perry Golf’s clients on a six-night tour can take in multiple top courses, such as the Royal Troon Golf Club, which is set to host the Open in 2024, Carnoustie Golf Links — where golfing legend Ben Hogan first played links golf in 1953 — and Kingsbarns Golf Links, where U.S. swimmer Michael Phelps made a “monster” 153-foot putt in 2012.

Such a tour might cost around $12,000 per person, including airfare and expenses, Dalgleish said. “Our demographics are folks that are members of multiple clubs that are spending significantly to join clubs … and that’s just part of their lifestyle,” he explained.

Kyle Phelps said being able to stay at one hotel and play a number of venues is the best part of golfing in the U.K.

“On a long weekend you can play The Old Course, Carnoustie & Kingsbarns,” he said. “In the U.S., that would be equivalent to playing Pine Valley, Merion and Pebble Beach on consecutive days.”

Another course in high demand is one of Murphy’s favorites: the Royal Dornoch in the Scottish Highlands in the northeastern part of the country. Being so far north, the sun sets about an hour later than in London which provides “spectacular” views for longer, Murphy said.

Scottish golf course Royal Dornoch has seen “unprecedented demand” from those wanting to play in 2022, according to its website.

“It’s just stunning in terms of views over the Dornoch Firth and onto the North Sea, and the town itself is a beautiful Highland Scottish town with an old cathedral,” said Murphy. The course is “right in the center of the village as well, so it’s a central part of the community.”

But because of “unprecedented demand,” bookings for the club’s “Championship Course” are closed this year, per the club’s website, and golfers are advised to register online for future availability.

Just outside Aberdeen in northeast Scotland is Murcar Links, a “hidden gem” with a “warm, friendly” environment, according to Murphy.

“It’s right on the coastline, with views of the oil rigs and the wind turbines in the sea in the background,” he said, calling it a “lovely, quirky little golf course.”

It’s nine miles from Aberdeen Airport, and has bookings available for this summer, which start at around 130 pounds.

Close to Inverness Airport is Castle Stuart, opened in 2009 and designed by the late developer Mark Parsinen and architect Gil Hanse, both Americans.

Sweden’s Alex Noren plays at the Scottish Open at Castle Stuart Golf Links on July 8, 2016. He went on to win the tournament.

Murphy likes the course for its service: “Everyone knows your name right from the time you arrive … Everything runs so smoothly between the arrival, the check-in, the meal in the clubhouse, the trip to the driving range, the visit to the first tee, the man serving you drinks at halfway … It’s more like American service, but at a personal level,” he said.

The course is currently promoting packages for October and November, and golfers are advised to email for availability.