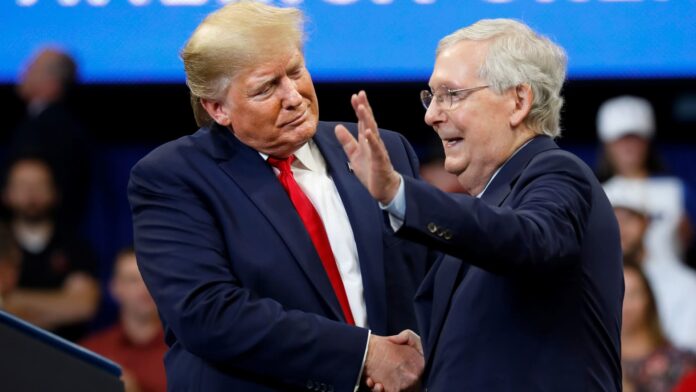 Republican megadonors want the GOP to take back the Senate, but they don’t have confidence that some of former President Donald Trump’s top picks can catapult their party to a victory in November.

Billionaire financiers Paul Singer, Dan Loeb and Larry Ellison have so far avoided donating directly to some or all of Trump’s staunchest allies running for Senate in the midterms: J.D. Vance in Ohio, Blake Masters in Arizona, Herschel Walker in Georgia, Adam Laxalt in Nevada and Dr. Mehmet Oz in Pennsylvania, according to Federal Election Commission records and people familiar with the billionaires’ donations.

All of those candidates have been endorsed by Trump. And many of them have previously sided with the former president on the false claims that the 2020 presidential election had widespread voter fraud — an accusation that’s been debunked by Trump’s former attorney general, Bill Barr, federal courts and several other top Republicans who served in Trump’s administration.

One GOP fundraiser said, “They would be lighting their money on fire if they got totally swayed by these candidates.” That strategist is advising clients to, instead, give to the super PAC closely aligned with Senate Minority Leader Mitch McConnell, R-Ky. — the Senate Leadership Fund — because “they have the best polls and they won’t sink money into races they know they can’t win.” The super PAC is run by Steven Law, McConnell’s former chief of staff.

Ad tracker AdImpact last week said that the Senate Leadership Fund has canceled the rest of its TV bookings in Arizona, a state where the campaign poll tracking website FiveThirtyEight shows Masters trailing Kelly by more than seven percentage points.

Republican U.S. senatorial candidate Blake Masters speaks at a campaign event on the eve of the primary, on August 01, 2022 in Phoenix, Arizona.

“Leader McConnell will end up saving the GOP candidates that Trump endorsed. He is focused and doesn’t let the noise get in the way,” veteran Republican fundraiser Jack Oliver told CNBC. McConnell has notably started being featured at fundraisers for all five of the candidates, recently showing up at events for Walker, Oz, Masters and Vance.

Vance and Laxalt are both in statistical dead heats with their Democratic rivals. Both GOP candidates are down by an average of less than a percentage point, according to FiveThirtyEight, which calculates the average of several polls.

Mehmet Oz, US Republican Senate candidate for Pennsylvania, speaks during a campaign event in King of Prussia, Pennsylvania, US, on Thursday, June 9, 2022.

All five of the Republican candidates going into the third quarter of the year were outraised and outspent and had less cash on hand in contrast to their Democratic rivals, according to FEC data tracked by nonpartisan campaign finance watchdog OpenSecrets.

Yet the Senate Leadership Fund has recently made up the funding gap, according to NBC News.

McConnell has also personally attended fundraisers for some of the candidates. One of the lawmaker’s former campaign advisors, Scott Jennings, posted a photo of McConnell on Twitter at a fundraiser for Oz, Walker and North Carolina Senate candidate Ted Budd. Jennings said the event “raised big $$$” and suggested it was McConnell who was leading the party to a potential victory. The Washington Post reported that a recent McConnell fundraiser for Masters raised $105,000 for the campaign.

McConnell’s support comes as billionaires pull back their funding to candidates.

Paul Singer, a billionaire Republican financier and founder of Elliot Management, has told GOP strategists that he and members of his club of wealthy political donors called the American Opportunity Alliance, plans to continue to finance the Senate Leadership Fund — but not necessarily individual candidates in the final weeks of the midterm elections, according to one Republican strategist who’s working the elections.

Singer has given $5 million to the Senate Leadership Fund since late last year, according to FEC records. He’s donated two separate $2,900 checks to both the Laxalt and Walker campaigns in March but nothing to Oz, Masters or Vance.

Hedge fund executive Dan Loeb has declined to make his usual big-dollar donations so far during this election cycle, telling Republican fundraisers in New York this summer that he was temporarily pausing major campaign contributions to focus on running his firm, Third Point, according to one fundraiser who was turned down by the billionaire.

During the 2020 election cycle, Loeb and his wife gave almost $4 million, combined, to GOP campaigns and just over $200,000 to Democratic-led efforts, according to data compiled OpenSecrets.

The Loebs have donated just over $2 million during this election cycle so far, recently giving $5,000 in August to Jersey Values PAC, which is run by Rep. Josh Gottheimer’s, D-N.J., leadership’s group, according to FEC records and OpenSecrets data. Dan Loeb has personally written two separate $2,900 checks to both Walker’s and Oz’s campaigns but nothing yet to Masters, Laxalt or Vance.

Loeb gave $250,000 each to two GOP super PACs in March, FEC records show. Those checks went to the McConnell-backed Senate Leadership Fund and the Congressional Leadership Fund, an outside group allied with House GOP leaders. During the last two-year election cycle, Loeb gave $800,000 to the Senate fund and $300,000 to to the House one. Loeb could kick up his donations to those groups over the next few weeks, and it’s unclear if he’s committed to donating toward the three other Trump endorsed candidates, a person familiar with Loeb’s contributions said.

Ellison, the billionaire chair of tech company Oracle, is helping Sen. Tim Scott, R-S.C., whom he considers a personal friend, and a few other friends running in the midterms, according to a person familiar with the matter. But he’s otherwise refused to make commitments to other candidates, this person said.

Ellison has donated at least $20 million toward the pro-Scott super PAC, the Opportunity Matters Fund, according to FEC records. Data from OpenSecrets shows that the super PAC has spent at least $1 million backing Scott, who is up for reelection this cycle, and over $7 million backing other Republicans running for Congress. Records show Ellison has not given a single dollar to Masters, Laxalt, Vance, Oz or Walker.

Real estate titan Stephen Ross hasn’t given a penny yet to Vance, Walker, Masters, Laxalt or Oz, according to FEC filings.

Ross was criticized for hosting a fundraiser for Trump and the Republican National Committee at his Hamptons home in 2019, but has distanced himself from some of Trump’s favorite candidates this election cycle. He’s donated over $685,000 to a mix of Republicans, Democrats and their affiliated outside groups this cycle. His biggest checks so far have gone to GOP organizations tied to Republican leadership, such as House GOP campaign arm, the National Republican Congressional Committee and a joint fundraising committee called Take Back the House 2022, federal election records show.

Steve Wynn, a billionaire who was previously accused by multiple of women of sexual harassment, has become a reliable donor to most of the five candidates and outside groups supporting them, according to FEC records. Wynn, who once ran Wynn Resorts, has denied the harassment allegations.

He’s given at least $2,700 each to Masters, Laxalt, Oz and Vance but nothing yet to Walker. He’s donated over $10 million toward Our American Century, a super PAC spending millions to help Republicans this cycle, including over $900,000 supporting Oz.

Wynn’s lawyer did not respond a request for comment.

Dan Eberhart, a longtime Republican donor, told CNBC that big contributions such as Wynn’s matter more than ever to the GOP with so many tight races just weeks before Election Day.

“It comes at a crucial time when Republicans need resources to remain competitive in battleground states,” Eberhart said.