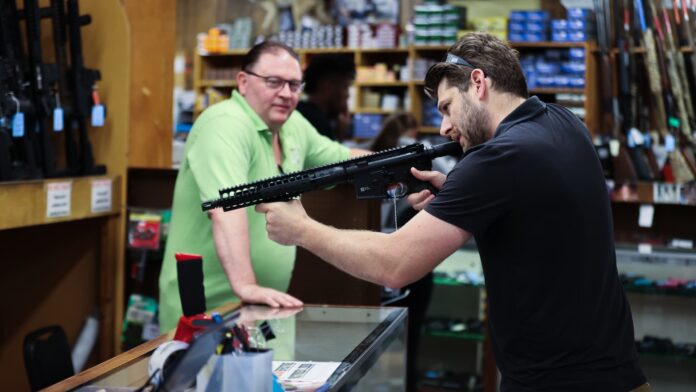 Fire arms are seen at the Bobâs Little Sport Gun Shop in the town of Glassboro, New Jersey, United States on May 26, 2022.

Major gun manufacturers have made over $1 billion in the last decade selling military-style assault weapons, according to an investigation by the House Committee on Oversight and Reform.

A memo from the panel outlines manufacturers’ revenue and marketing strategies for assault-style weapons, focusing on the the gun brands used in recent mass shootings. The release came ahead of a Wednesday hearing on the role of the firearms industry in pervasive gun violence in the United States.

At the hearing, Chairwoman Rep. Carolyn B. Maloney, D-N.Y., announced that the committee will issue subpoenas to Smith & Wesson and other manufacturers.

The committee also provided estimated assault weapon revenues for these companies since 2012, the year a gunman killed 20 children and six adults at Sandy Hook Elementary School in Connecticut:

The number of recent mass shooting deaths was also listed for each company, with assault weapons from all five brands used in at least two recent massacres. The gunman who killed 19 children and two teachers in May at Robb Elementary School in Uvalde, Texas, used a weapon made by Daniel Defense.

The brands themselves do not track deaths, injuries or crimes that involve their weapons. Sig Sauer told the committee that it does “not have the means” to track deaths. Sturm Ruger said it learns of incidents through its “customer service department,” the media or from occasional lawsuits.

House Democrats are pushing to vote on an assault weapons ban later this week. If passed, the bill is unlikely to make it through the Senate.

Smith & Wesson, Sig Sauer and Sturm Ruger did not immediately respond to a request for comment.