HomeInvestingHere are the top defensive plays from heavy-hitter investors as recession fears...
Investing 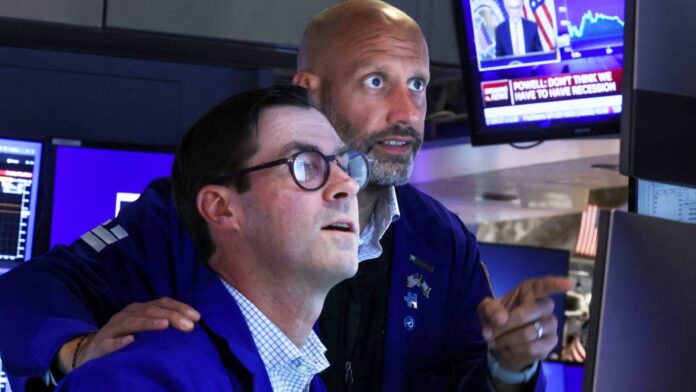 Fears of a recession intensified even more after data showed the economy shrank for a second straight quarter, making a strong case for defensive stocks for investors worried about slowing growth. GDP fell at a 0.9% annualized rate in the second quarter after a 1.6% decline in the first three months of the year, hitting a widely accepted rule of thumb for a recession. Many on Wall Street believe it’s time to get defensive in the market with corporate profit expected to contract. Defensive stocks tend to provide stable earnings and consistent dividends regardless of the state of the overall stock market and the economy. They are often well-established companies in sectors like consumer staples, health care and utilities, such as Procter & Gamble , Johnson & Johnson and Coca-Cola . “To build up defenses against a potential ‘slump’ scenario, in which weaker economic data drives lower corporate profit expectations and downside in stocks, we believe investors should add exposure to quality-income stocks, the healthcare sector, resilient credits,” said Mark Haefele, CIO at UBS Global Wealth Management. Stocks with defensive qualities were found in some of the portfolios of Wall Street’s biggest investors such as Warren Buffett , Leon Cooperman and David Tepper as they play defense in the market with recession risks rising. The “Oracle of Omaha” has had a longtime love for defensive names such as Coca-Cola, one of the biggest holdings in his portfolio for decades. Berkshire also owns relatively small stakes in Procter & Gamble, Johnson & Johnson at the end of March. Meanwhile, Chevron, a big stake in Berkshire’s portfolio at the end of the first quarter, pays a big dividend of 4.1%. In comparison, the S & P 500 pays 1.7%, according to FactSet. Major pharmaceutical companies and insurance companies are also considered defensive stocks. Healthcare giant UnitedHealth was found in Third Point’s and Appaloosa’s portfolios in the first quarter. Leon Cooperman’s Omega Advisors had an investment in Cigna . Cooperman previously said he expects either surging oil prices or the Fed’s aggressive tightening will tip the U.S. economy into a recession next year, and that could mean a 40% drop for the S & P 500 from peak to trough. Precious metals like gold and silver are also viewed as defensive assets historically as they tend to hold value well in market downturns. Greenlight Capital’s David Einhorn held sizable stakes in the SPDR Gold Trust and the iShares Silver Trust ETF as of the end of March. Commodities like silver and gold are also considered hedges against rising prices.

U.S. calls on Russia to halt forced deportations of Ukrainians