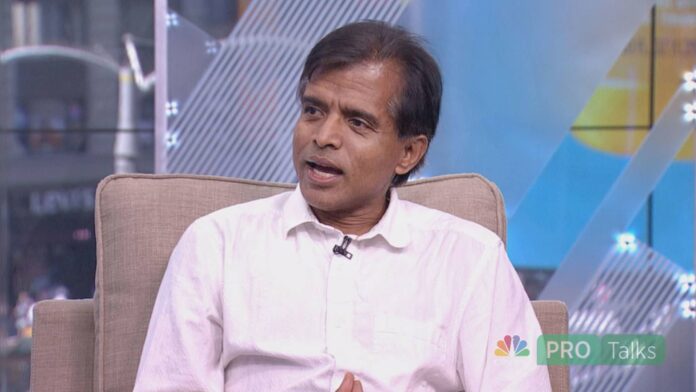 Some bank stocks may look cheap, but for New York University’s Aswath Damodaran, they aren’t worth the risk. Instead, he would get exposure to the sector without taking the chance that a catastrophic risk could take out a specific stock, he told CNBC’s ” TechCheck ” on Tuesday. “Rather than put my money in the cheapest banks, I’d buy a bank ETF,” said Damodaran, professor of finance at the Stern School of Business at New York University, who is sometimes referred to as the “Dean of Valuation.” “They are not all going to go under,” he said of the banks. However, he said there is a real risk some financial institutions could come under stress in the near term. For instance, Credit Suisse shares plunged after concerns were raised about the bank’s financial health. There was also panic among pension funds in the U.K. after some bonds held within them lost half their value in a matter of days. That led to the Bank of England’s emergency bond buying in late September. SPDR S & P Bank ETF , which is composed of big banks, is down about 13% this year. The SPDR S & P Regional Banking ETF has lost more than 11% year to date. Damodaran’s call on the banks fits into his larger thesis around the market worrying about “catastrophic risk.” His biggest concern is that some stocks may not be able to take the moves in the market when it reacts to variables such as interest rates and exchange rates. “I want to steer away from companies which are close to the edge … that are too highly levered, that have big fixed costs,” he said. Accounting for the ability to weather the market turbulence is like having a house inspection on your Florida coast home and a hurricane is coming, he said. “Your house inspection has to make sure your house can withstand a hurricane before you go in and ask, ‘How old is the air conditioning?’ I think that worry has to be brought into your valuation when you look at a company,” Damodaran said. “That catastrophic risk has to be factored in.”