How Taylor Swift turned ‘Midnights’ into her biggest album success yet 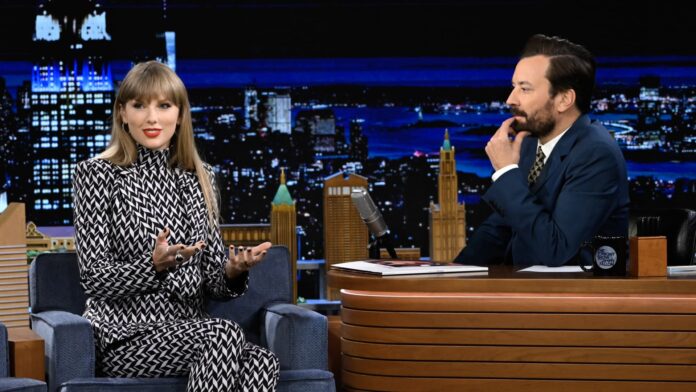 Taylor Swift during an interview with host Jimmy Fallon on Monday, October 24, 2022

Taylor Swift’s “Midnights” may have left the indie-folk lovers of her previous albums disappointed, but breaking several sales and streaming records within its release week, including taking all of the top 10 spots on the Billboard Hot 100, Swift’s tenth album is her biggest success yet, breaking the record for largest overall week for any album, by equivalent album units, within just four days.

“The results speak for themselves. She’s as popular as she’s ever been,” said Berklee College of Music’s music business professor George Howard. “She creates this kind of frenzy among a significant amount of fans.”

It’s not like Swift’s previous albums weren’t successful. Rather, her number of streams have consistently grown over the years as the streaming industry has captured more of the music listener market share. Last fall, “Red (Taylor’s Version)” reached 90.8 million streams within its release day and broke Spotify’s record for the most-streamed album in a day by a female artist. The previous record was 78.7 million streams — held by Swift’s “Folklore.” With “Midnights,” Swift broke her own record again, reaching 185 million streams on its release day.

What is it about “Midnights” that has made it the pop star’s biggest success yet, and why did it take Swift four more new albums to break her own record?

In her acceptance speech for Video of the Year award for “All Too Well (10 minute version) (Taylor’s version) (from The Vault,)” at the VMAs in August, Swift surprised the world by announcing that she was releasing her brand new album “Midnights” on Oct. 21. Fans expected Swift’s next release to be another re-recording of one of her previous albums, as her past two albums were re-recordings with “Fearless (Taylor’s Version)” released in April 2021 and “Red (Taylor’s Version)” in Nov. 2021. The fact that she broke this release pattern and announced a new album at an awards show, something she’s never done before, created a lot of initial buzz around “Midnights.”

But in several other respects, Swift set a new standard by reembracing the past and some of her own past best practices.

Back on social media with ‘Swifties’

Swift disappeared from the public eye for a year following her dispute with Kim Kardashian and Kanye West in 2016. Not only did she stop making public appearances, but she also took a break from social media altogether. Her absence came as a big shock to fans, who as far back as the release of “1989,” were accustomed to Swift logging on to Tumblr every night to interact with her fans.

Diana Kovalonok, left, and Angelina Damiano sing along to one of Taylor Swift’s hits while attending a listening party for her new album, “Midnights” in Chicago’s Old Town neighborhood on Thursday, Oct. 20, 2022.

Swift’s announcement of “Midnights” led to a change in this lower profile social media stance. After the VMA surprise, Swift made sure to not let the buzz die down in the following seven weeks leading up to her album’s release, posting behind-the-scenes looks at the making of the album all the way to nightly “Midnights Mayhem With Me” TikToks where she revealed track titles one-by-one. Suddenly it feels like 2015 again for fans, as Swift is posting practically every day and interacting with fans.

“She’s a very very smart marketer in terms of keeping her distance from her fans but still making them feel connected to her by putting these clues out there … and it feels like a dialogue,” Howard said.

Swift also launched a massive line of merchandise leading up to the “Midnights” release, which specifically boosted sales of a category which in this day is associated more with niche genres than pop stars: vinyl albums. Along with the $75 hoodies, there are four different colored vinyl albums offered for sale featuring different cover art and a unique disc color, ranging from moonstone blue to jade green, mahogany and blood moon, with a price of $30. For fans who collect all four vinyl albums and align them together, the back covers make a clock striking midnight. There’s also the “Taylor Swift Midnights Vinyl Clock,” which when assembled, holds together the four vinyl albums to act as a working clock, becoming an essential collector’s item for her fans, known as Swifties.

Swift broke vinyl album records by reaching almost 500,000 copies on release day, three times as much as Harry Styles’ “Harry’s House” sold in its entire first week. In an age where vinyl sales are back on a steady rise, Luminate, the entertainment data company that powers the Billboard charts, announced that “Midnights” had the largest sales week for a vinyl album since it began tracking music sales in 1991.

The demographics of vinyl buyers also help to explain the large vinyl album sales “Midnights” is seeing. Generation Z now makes up 34% of women vinyl buyers, according to Luminate. Audience intelligence platform Audiense calculates that roughly 55% of Swift’s global audience is female, and just under 60% are between the ages of 13 to 24 years old.

“When you consider that alongside the continued growth of streaming, which is up 11.6% over the first half of 2022 versus the first half of 2021, and its accessibility, you have millions of fans consuming a highly-anticipated release from an artist as big as Swift in multiple ways, leading to first week numbers like the ones we’re seeing,” said Luminate’s CEO Rob Jonas.

Going back to pop

Winning Album of the Year at the Grammys for her indie folk meets alternative rock album “Folklore” wasn’t enough to keep Swift away from pop music. Swift experimented with this new folk sound throughout 2020 on sister albums “Folklore” and “Evermore” and collaborated with bands like Bon Iver and The National. But with “Midnights,” she’s back to her comfort zone of pop.

“She has been utterly successful at expressing herself through various genres of authentic songwriting and fan engagement. She is as truthful a storyteller and creative artist, as she is an authentic person with respect to the way that she engages with her fans. I think that she’s proven that over and over and over again,” said New York University Steinhardt’s director of music business program Larry Miller.

All 13 tracks on “Midnights” were produced by Swift and her longtime friend Jack Antonoff, who first collaborated with the singer on her fifth studio album “1989.” Experimenting with an atmospheric synth-pop style with hints of R&B, “Midnights” marks the revival of Swift’s catchy, pop-style songwriting that she deviated away from over recent years.

Announcing her sixth tour, “Taylor Swift | The Eras Tour,” on Tuesday, Swift is ready to get back on the road for the first time in almost five years. Part of that has to due with the pandemic.

Before “Midnights” release, fans suspected that Swift would soon announce her next tour, after Covid interrupted her typical tour-every-two-years pattern developed early on in her career. Releasing four new albums and two re-recordings since her last tour also gave Swift a much larger discography to support on tour. The upcoming tour, by name, is intended to highlight all the different eras throughout her career rather than “Midnights” alone.

The tour doesn’t start until the spring of 2023, but it’s likely that Swift’s tour announcement will help give the streams and sales of “Midnights” an extra push, as the album’s release week has come to a close.

“As someone in her place, she needs to have a kind of consistent drip approach to keep herself in the public eye. Touring is the traditional way of doing that. When you’re on the road it’s not just the live shows, it’s the halo around that,” Howard said.